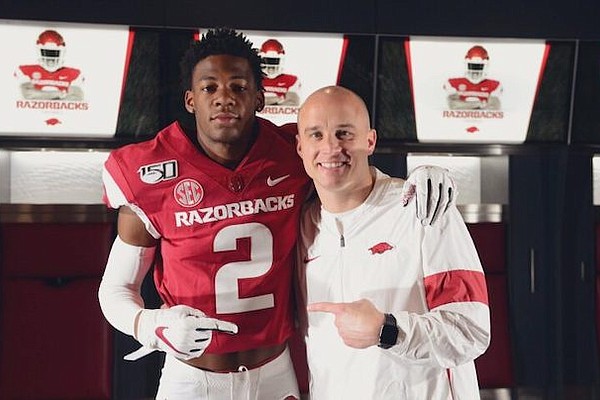 FAYETTEVILLE — Desoto has always been a football powerhouse in Texas and that should not be any different during a 2020 season that won’t get officially started until Oct. 2 at Ben Dial Stadium against visiting Judson.

Arkansas wide receiver commit Jadeon Wilson (6-3, 172) is one of numerous Division I prospects that grace the roster this season for Desoto head coach Claud Mathis.

“(The Razorbacks) are getting one of the hardest workers we have on this football team,” Mathis said. “He is going to bring his A-game every single day. His work ethic is unbelievable. His knowledge of the game is unbelievable. He understands what the defense is giving us, what they are doing to us and what he needs to do for him to be successful.”

He caught 28 passes for 520 yards and six touchdowns as a junior.

“He is a great route runner, epecially when he gets to the top of his route,” Mathis said. “He can run. He is a 47 (second) guy in the quarter (mile run). Not only can he run, but he can get open for us.”

Wilson’s decision to commit to Arkansas was due in large part to receivers coach Justin Stepp and offensive coordinator Kendal Briles.

“Those two guys went to work on tag teaming him,” Mathis said. “Coach Stepp got on him first and was the main guy and then when Coach Briles got on board, he knew Jaedon was the type of player he wanted in his offense.”

“I think we have about eight,” Mathis said of his Division I prospects. “This is a talented bunch that is ready to get after it.”

Mathis stressed that DeSoto has done its best to get this squad to the field.

“It has been tough, but we are dealing with it the best that we can,” Mathis said. “I know that we are keeping our kids safe and have a great plan for our kids.

“We are definitely fired up about it now. We are now being able to get into meetings instead of just the weight room. We just gave to maintain and make sure we are keeping our kids safe.”

It is a rematch of Carroll’s 35-17 win that ended Desoto’s season last year.

“It will be a good challenge for us both,” Mathis said. “It will be two talented teams ready to get after it.”