Reed hopeful Arkansas is his best move yet 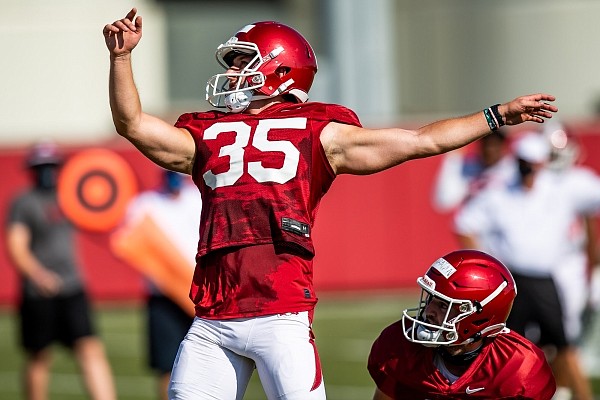 Arkansas kicker A.J. Reed attempts a field goal during a preseason practice on Aug. 28, 2020 in Fayetteville.

FAYETTEVILLE — A.J. Reed described himself as a military brat growing up.

His mother, Lisa, attended the University of Arkansas, and his father, Robert, wound up at the Air Force Academy. During a Zoom interview Monday, Reed estimated he lived in upward of 10 different cities as a kid.

Now, he is hoping his most recent move, from Duke to Arkansas, is his best yet.

The placekicker had a number of other programs reach out when he was in the NCAA’s transfer portal, but most of his extended family lives in Arkansas, the state he calls home. Having a full-time special teams coordinator to work with in Scott Fountain was a major draw as well.

“He is 100 percent dedicated to special teams, which is special,” said Reed, whose parents grew up in Fort Smith. “That’s not the norm in college football. Having him around us at all times really keeps us locked in. He’s such a detail-oriented guy that it rubs off on all of us as a group as specialists.

“I think we’ve gotten a lot better just being with him every day on the field and in the meeting room.”

Reed grew up cheering for the Razorbacks. He has fond memories of watching the likes of Darren McFadden and Felix Jones make plays in the running game.

As he grew older, though, and his own football career began to take off, Reed didn’t keep up with Arkansas football as much. After deciding to leave the Blue Devils program, he reconnected with Fountain, who recruited him in high school, and got in touch with Arkansas coach Sam Pittman.

“I’m so glad I've been able to come back here and kind of reignite that passion,” said Reed, who chose the Razorbacks over Nebraska, Florida International and Georgia Tech. “I knew how good of a coach (Fountain) was. That was another plus. Once I finally got on the phone with Coach Pittman, I found out how awesome of a guy he was and his plans for this program.

“I was sold and I haven't looked back since.”

In his final season at Duke, Reed connected on 15 of 18 field goal attempts and was perfect on 34 extra-point tries. He made two field goals in five different games, including ACC games against Georgia Tech, Syracuse, Wake Forest and Miami.

According to cfbstats.com, Reed was 5 of 5 kicking on turf fields and 10 of 13 on natural grass. Those numbers were a big improvement from his true freshman season when he was just 3 of 10 on field goal attempts.

A nagging groin injury caused him to miss his second season with the Blue Devils, and in 2018 he was relegated to kickoff duties, tallying five touchbacks on 34 kicks. Entering the 2020 season, he is healthy and eager to take the field again.

“After (the injury), really hitting the weight room hard helped me to make that improvement,” Reed said. “I just feel like I’ve gotten better since. I feel great right now. I can’t wait to get the season started.”

In a field goal competition during Arkansas’ second scrimmage of the preseason, Pittman said both Reed and kicker Matthew Phillips connected on 4 of 5 field goals with a long of 52 yards. He was pleased with the progress of his kickers and jumped at the chance to brag on them.

Fountain, in his first Zoom interview of the preseason Tuesday, said he has gotten consistency from Reed aside from one lull.

"He’s a guy that at Duke as a freshman had kind of an up-and-down year. The thing I like about him that he did at Duke, he battled his way back," Fountain said. "He really finished at Duke with a phenomenal career. He kicked a 51-yarder in the (Alabama) game. I've been pleased with him.

"He’s brought some good stability to that position, and having a guy that’s been in some big games, that means a lot at that position."

In ideal conditions, Reed says he feels confident from 55 yards out. Execution from snap to kick was a work in progress at first, he said, but there have been advances in that aspect since preseason practices began.

George Caratan, a transfer from Michigan who is believed to be the Razorbacks’ top punter, is new to place holding, but is becoming more consistent. He and Reed have worked for months to create chemistry. Long snapper Jordan Silver has been steady, Reed added.

“Obviously when you’re working with a new group there’s definitely a little bit of a learning curve,” he said. “But I think as we’ve gotten through camp we’ve got a lot better.

“I feel like right now we’re really ready to step on the field in Game 1.”