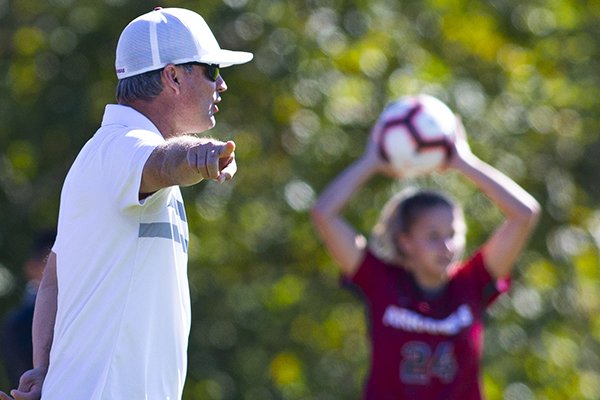 Arkansas soccer coach Colby Hale yells to his team while Abbi Neece prepares for a throw in during a game against Georgia on Sunday, Oct. 27, 2019, in Fayetteville.

FAYETTEVILLE — Arkansas is the preseason favorite to win the SEC soccer championship, according to a poll of league coaches that was released Wednesday.

The Razorbacks are the reigning SEC champion after posting an 8-1-1 record in conference play last season. The team was 17-4-1 overall last year, including a victory in the NCAA Tournament and runner-up finish at the SEC Tournament.

Ninth-year Arkansas coach Colby Hale was the SEC coach of the year in 2019.

The Razorbacks are scheduled to open the season Saturday at 3 p.m. with a home game against LSU. Arkansas' eight-game, SEC-only schedule also includes games against South Carolina and Texas A&M, the teams picked to finish second and third, respectively, in the league.

All 14 SEC teams will qualify for the SEC Tournament that is scheduled to begin Nov. 13 in Orange Beach, Ala.