Unit has lingering stench to air out 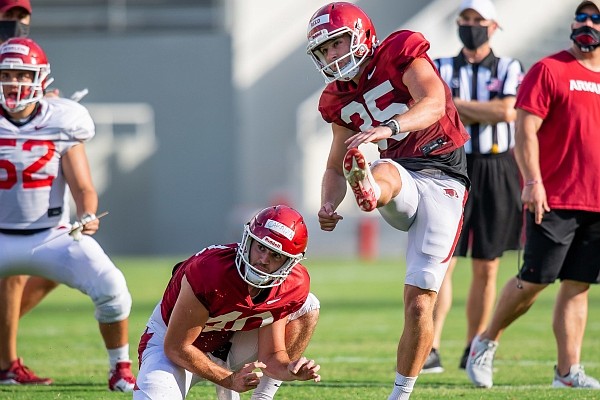 Tenth in a series previewing position groups for the University of Arkansas football team.

FAYETTEVILLE -- Sure, there were flashes of solid special-teams play for the University of Arkansas the past couple of years.

But they did not come close to outweighing the agony of some miserable moments in the kicking game for the Razorbacks during back-to-back 2-10 seasons.

On the plus side, freshman Treylon Burks was a breath of fresh air as a punt returner in 2019, bringing what felt like a threat to break off long runs on many of his returns while averaging 10.8 yards, with a long of 32 yards. Kickoff returner De'Vion Warren has been solid, though he hasn't had a repeat performance of the 100-yard kickoff return he pulled as a freshman against Auburn in 2017.

Then there's left-footed kicker Connor Limpert, who made a game-winning field goal at Ole Miss in 2017 and finished his career last year as the most accurate field goal kicker in Arkansas history. Deep snapper Jordan Silver has played 224 snaps the past two years and has done well enough that he has avoided publicity by not sailing one over the holder's hands or the punter's head.

Those are the redeeming factors since 2017.

Then there are the calamities, the plays that made worst-of highlight reels. The faux fake punt carried out by North Texas' Keegan Brewer for a 90-yard touchdown return was one of the plays of the year in all of college football in 2018. In the two games immediately after that game, Auburn's Noah Igbinoghene and Texas A&M's Jashaun Corbin had kickoff return touchdowns covering 96 and 100 yards, respectively.

A two-handed toss by punter Sam Loy against Auburn last year on a fake punt resulted in an easy interception.

"I've seen both of those, and they're tough," said first-year Arkansas special-teams coordinator Scott Fountain, referring to the Brewer return and the interception. "The fakes can go great, or everybody can say you're the worst coach in the world."

The Razorbacks are hoping those kicking game embarrassments are behind them this season under first-year Coach Sam Pittman.

For the first time since the NCAA began allowing 10 full-time assistants, Arkansas will boast a coach dedicated to working with the kickers, punters, holders, snappers and return specialists.

Fountain will be working with a crew of returning talent that features Burks, Warren and Silver along with some transfers who could grab starting jobs.

Fountain, who has coached in four national championship games, has been working on and off with special teams for 20-plus years, including most of the past dozen.

"He wants you to give 110% on those special teams. The key, what he's gotten us to do, is we go through a very tough period and then we go to special teams because when it comes to a game, the transition of going from offense or defense to special teams is a big key. A lot of people are tired, so he tries to make it as gamelike as possible."

Kicker A.J. Reed, a graduate transfer, had a big season at Duke last year, making 15 of 18 field goals and all 34 of his PATs. His mother, Lisa, is a UA graduate, and his father Robert is an Air Force Academy graduate, so he grew up rooting for the Darren McFadden-era Razorbacks.

He did his research before electing to sign on with his mother's alma mater.

"That was a big reason why I came here, was to play for someone who's as great of a coach as Coach Fountain," Reed said. "He's 100% dedicated to special teams, which is special. That's not the norm in college football.

"Having him around us at all times really keeps us locked in. He's such a detail-oriented guy that it rubs off on all of us as a group of specialists."

Fountain said he works from the standpoint of asking starters who would shape up as quality special-teamers to work on two units, and reserves who fit the special teams body type to work on up to four. His philosophy is to be solid, which basically means stay out of the headlines for the wrong reasons.

"What is solid?" he asked. "Do your job. What is your assignment for the kicker with field zones, hang, distance? Be solid. I don't want to ever hurt our football team.

"If we can return a punt for 20 yards, we just stole two first downs. If we can get a kick return out to the 40, we've just given our offense great momentum."

Linebacker Grant Morgan has willingly jumped on the special-teams unit this year, just like he has for his previous seasons with UA.

Reed and returner Matthew Phillips both made 4 of 5 field goals, including a 52-yarder each, in the Hogs' second scrimmage. Their battle for the job continues.

"A.J.'s done a good job," Fountain said. "He had one week in there where he had a little bit of a lull, but for the most part he's been a consistent guy.

"Those two guys have certainly done a good job of competing. We'll kind of see who wins it out, but I've been real pleased with Matthew Phillips. He's come in and really worked hard. I think we have a real solid kicker there."

The Razorbacks were not a good punting team under Chad Morris. They were last in the SEC with a 39.3-yard punting average last season, and 86th in the FBS with a 37.5-yard net punting average. Loy and Reid Bauer return from that group, and Michigan grad transfer George Caratan is now on the roster.

Fountain said he talked to people in the business who keep up with specialists and began checking on Caratan, who was in the transfer portal.

"But I think George is a guy that's coming in, he's competing, doing what we want him to do there. He's been a real good pickup for us. We're really pleased to have him in our program."

Caratan also has been serving as the holder on placekicks, a job held by backup quarterback Jack Lindsey last year.

"What I've done is always have the punters hold," Fountain said. "Now we've certainly used some quarterbacks as well. When I was with Coach [Kirby] Smart, he had always liked the quarterback because he felt like he had a better opportunity with a fake."

Fountain said punters and kickers have all practice to work on their skills, which is an advantage because quarterbacks are involved in all the other parts of practice.

"We typically get a 20-30 minute meeting every day to get organized for practice," Fountain said. "They have specific assignments they coach. I just want them to be an expert at that area they're focusing on. If they do that, we can be a great football team, because like they say now, 12 eyes are better than two."

Return specialists Treylon Burks and De’Vion Warren have lots of returns under their belts, including Warren’s 100-yard touchdown vs. Auburn in 2017, so they could rank among the SEC’s best. Silver has been a very steady snapper. It’ll be hard to top the production of Limpert, who made 14 of 19 FGAs last year and left as UA’s most accurate FG kicker. Phillips and Reed are battling for the starting job, while Vito Calvaruso joins them in the competition for kickoff duties. Punting was a weak spot last season with a 39.3 average, so Caratan has a chance to unseat Loy and Bauer.