Bobby's back: Petrino returning to coach in Natural State for first time since Razorbacks 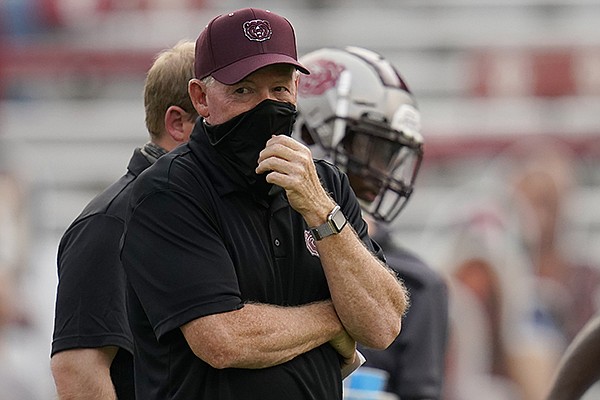 Missouri State head coach Bobby Petrino walks on the sidelines in the first half of an NCAA college football game against Oklahoma Saturday, Sept. 12, 2020, in Norman, Okla. (AP Photo/Sue Ogrocki)

Bobby Petrino’s lasting impression in the state of Arkansas wasn’t what he intended.

He was fired as the University of Arkansas head football coach on April 10, 2012, for misconduct that was uncovered after his infamous motorcycle crash. Now on his third head-coaching job since his firing, Petrino will return to the Natural State to coach for the first time since when Missouri State is entertained by the University of Central Arkansas at 7 p.m. Saturday at Estes Stadium.

During a video conference Monday, Petrino somewhat downplayed his return to a state where he led the Razorbacks to a 34-17 record in four seasons. Instead, he talked about the challenges he and his team will confront against UCA, starting with the atmosphere.

“It’s gonna be different because they have a purple and gray field, and I’ve never coached on that before,” Petrino said while smiling, referring to UCA’s playing surface. “That’s gonna be interesting for me, but this really isn’t about me. It’s about our football team and our players preparing for a game and going in to play a really good Central Arkansas football team.”

It’s uncertain what type of reception Petrino will receive from fans at Estes Stadium, where capacity will be at 20% because of coronavirus concerns. One thing is clear: He has UCA’s respect.

“There’s a renewed energy in Springfield, Mo., with Coach Petrino,” UCA Coach Nathan Brown said. “We know his track record. I think he’s one of the top offensive coaches that’s in college football right now, no matter where he’s been.

“He’s always had high-profile offenses, and he’s a very good coach. He wins wherever he goes.”

Winning was precisely what Petrino did at Arkansas. After a 5-7 finish during his first year in 2008, he guided the Razorbacks to an 8-5 mark, then a 10-3 record in 2010 that included a trip to the Sugar Bowl. His best season came in 2011 when Arkansas went 11-2 and was a contender late in the season for a spot in the Bowl Championship Series title game.

The offseason wasn’t as sparkling for Petrino.

He suffered serious injuries after he ran his motorcycle off the road in Madison County on April 1. Petrino said he was alone during the crash when he appeared at a subsequent news conference while wearing a neck brace. It was later discovered he’d been riding with a woman he’d previously hired as the team’s athlete development coordinator. The university also found out he and the woman had an ongoing relationship.

Then-Arkansas athletic director Jeff Long fired Petrino for demonstrating what he called “a pattern of manipulative and deceptive behavior” for trying to hide the relationship that had gone on for a lengthy period of time.

That broke Petrino’s ties with Arkansas. His time at both Western Kentucky and Louisville since wasn’t always rosy, either. He was fired by Louisville before the end of the 2018 season.

Now he’s working on rebuilding his brand at Missouri State, where he’s looking to breathe life into a program that hasn’t experienced a great deal of success recently.

Brown isn’t focused on what Missouri State has done in the past. He said Petrino makes immediate impacts on programs, particularly the offense.

“He’s one of the best offensive minds in the country, and he’s done it for years,” Brown said. “He does it with a lot of formations, a lot of personnel. He always, always has great quarterback play.

“It’s hard to gauge anybody when you’re playing a team the caliber of Oklahoma, but you saw flashes and moments where we said, ‘Man, you know what, these guys from Missouri State are pretty darn good.’

Petrino said his team is preparing for a battle against a UCA team that hasn’t played in more than three weeks.

But he also knows there will be some eyes on him based on what he’s done, both good and bad, during his four years with the Razorbacks.

“Obviously my memories of Arkansas are very, very good,” he said. “Love the state. Love the people there. So it’ll be fun to get back there and be able to coach again.”