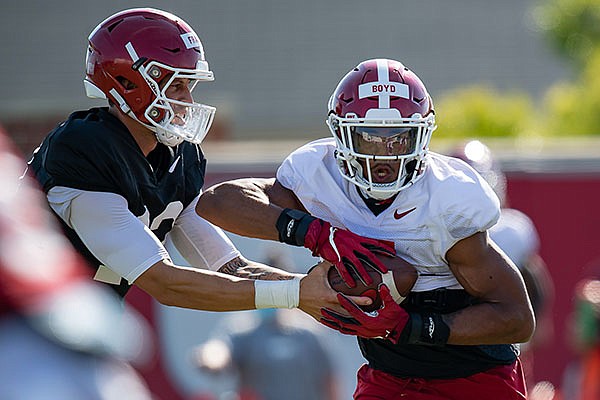 FAYETTEVILLE — University of Arkansas Coach Sam Pittman wants to get more touches for running back Rakeem Boyd this season.

Boyd, a senior from Houston, has accounted for 2,192 yards rushing and receiving on 349 touches — 307 carries and 42 catches — for an average of 6.3 yards the previous two seasons.

No wonder Pittman, who makes his Arkansas head coaching debut against No. 4 Georgia today, wants to get the ball in Boyd’s hands at a higher rate.

“I think you have to try to get him anywhere from 18 to 30 [touches per game],” Pittman said on his radio show this week. “You have a guy like that, you have to get him the football.

“Otherwise, he’s just another good player that you’re not using on your offense. We need to feature him as much as we can.”

“Obviously, you wouldn’t want to run him 30 times every game,” Pittman said. “But you want to run him to win the game, so whatever that number is, I think he can hold up and he’ll have success.”

Boyd, who was elected a captain by his teammates, said he’s ready to do whatever the Razorbacks need.

Georgia returns eight starters on a defense that led the nation in stopping opposing backs, holding opponents to an average of 76.4 yards rushing per game and 2.6 yards per attempt.

Pittman was the Bulldogs’ offensive line coach the previous four years, so he knows all about their defense. But he said the Razorbacks have to run the ball to have success.

“We certainly won’t and cannot afford to get rid of our running game. Because we feel we’ve got a really good back and our line has improved tremendously. We just have to keep pounding it in there and see if we can’t break one.”

Boyd has shown he can be productive against SEC defenses. As sophomore against Alabama, he had 15 carries for 102 yards, and had 5 receptions for 24 yards.

In nonconference play, Boyd had a career-high 185 rushing yards on eight carries in a 45-19 loss to Western Kentucky last season in what turned out to be Chad Morris’ final game as the Razorbacks coach.

“I feel real, real confident in Rakeem Boyd,” Pittman said. “He’s done everything that we’ve asked him to do.

“Obviously, being the captain, this team has high respect for him, as well as his coaching staff. He has done a really good job with catching the ball out of the backfield and probably even a better job at protecting when linebackers come up.”

Feedback from the NFL Draft Advisory Board to Boyd after last season was that he needed to improve as a receiver, despite his 42 catches for 325 yards the past two seasons.

“I wasn’t shocked at the time I got the report back from the NFL scouting service, I just thought maybe he doesn’t have very good hands,” Pittman said. “That’s not the case. He catches the ball easily, and we just need to highlight that for our football team and of course for his NFL Draft future.

“Certainly he’ll help us win catching the ball out of the backfield.”

Boyd was voted to the preseason All-SEC second team by the coaches and media. He was the only Razorback on the All-SEC teams.

“All the accolades and the awards and all that, to be honest I have no idea about,” Boyd said. “I’m up here playing ball. I’m trying to be the best teammate I can be.”