Podojil national player of the week for big performance 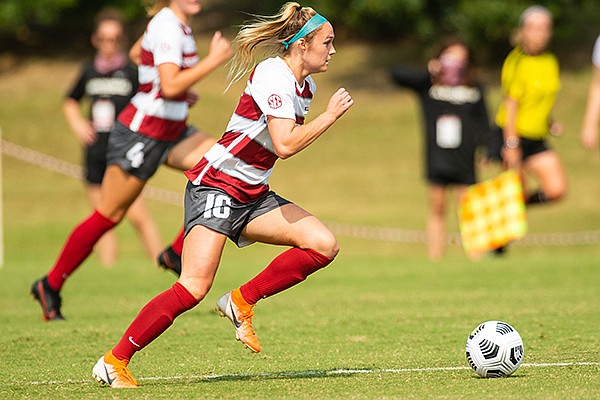 Arkansas forward Anna Podojil pushes the ball upfield during a game against LSU on Saturday, Sept. 19, 2020, in Fayetteville.

FAYETTEVILLE — Arkansas sophomore forward Anna Podojil estimates there were around 40 family members and friends in attendance at Kentucky on Sunday to see her and her sister, freshman midfielder Ellie, play.

"We probably would have had about 100 if there weren’t any restrictions," said Anna, who grew up in Cincinnati, about 80 miles from the Kentucky campus.

“Being in the SEC we don’t get to play too many games up north, so it was cool just to see so many fans there to support my sister and me.”

Podojil said playing in front of so many people she knew — Jordyn Rhoades, a Kentucky forward and the SEC’s leading goal scorer, is a childhood friend — provided motivation to be at her best. The result was one of the best games of Podojil’s career, a two-goal, two-assist outing as the Razorbacks defeated the Wildcats 4-1.

“We always joke with Anna that she doesn’t know how good she is,” Arkansas coach Colby Hale said. “She has a true humility to her that she just works hard for the team. Obviously she’s a really good player.

Podojil is no stranger to accolades. As a freshman she was an All-American — the first ever at Arkansas, along with teammate Haley VanFossen — and was named SEC newcomer of the year after she scored 14 goals and had seven assists. Prior to this week, Podojil had won four SEC weekly awards and a national player of the week award.

She said she would prefer if she didn't find out about the awards until after the season.

"At the end of the day it's always a team effort and my teammates helped me get those goals and assists," Podojil said. "I try not to think about it too much or let it get to my head."

With 16 goals scored through 25 career games, she is already among the Razorbacks' all-time best, just six goals shy of teammate Kayla McKeon for 10th in program history.

Hale said he hasn’t been surprised by her success at such a young age.

“She’s pretty athletic, pretty tough,” Hale said. “We knew she was going to be pretty good.

"What helps us is we have so many good players. You can't just focus on Anna....You have to stop a lot of good players."

Podojil is also a member of Arkansas’ track and field program and redshirted in that sport as a freshman. Hale said Razorbacks track coach Lance Harter thinks Podojil can be a scorer in the 400 meters.

Podojil attributes her success to having confidence in herself.

“In college soccer you really have to have a different mentality,” Podojil said. “The transition into college, a lot of girls can back down and lose their confidence, so I think that’s a really important thing that I’ve done well with that.”