Goforth’s return to Arkansas an emotional one 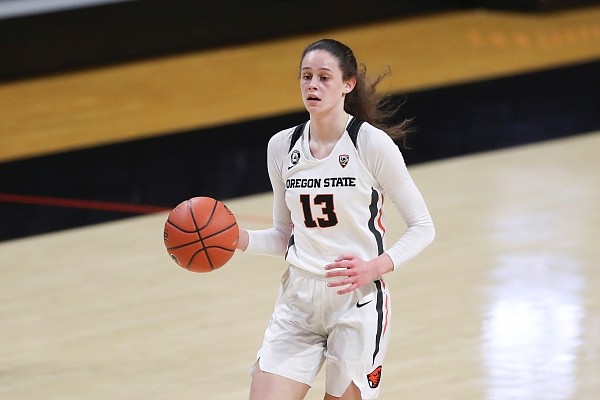 FAYETTEVILLE — Sasha Goforth is happy to be a Razorback, but she acknowledged it has been an emotional week.

The former Fayetteville basketball standout and McDonald’s All-American announced on social media Monday that she was entering the transfer portal after a successful freshman season at Oregon State. Two days later, she chose to come back home to play for Arkansas.

Goforth described the week as a mix of emotions from the lows of telling her Oregon State teammates and coaches that she was leaving to the excitement of friends and family knowing she was returning home.

“Definitely very overwhelming,” Goforth said Thursday. “In a good way with the support, I appreciate that so much. It’s just hard. I’m a loyal person, so this is really hard for me, even though I know it’s what’s best for me.

“It was just incredibly hard for me because I hate letting people down. [Wednesday] was obviously really awesome to see everyone so excited. I’m so excited to be here and get with the team and overwhelmed with love and support … it’s just been so much happening.”

Amber Ramirez, also a former McDonald’s All-American, announced that she would be returning for her final season of eligibility the day before Goforth let her decision be known. The 5-9 sharp-shooting guard from San Antonio doesn’t really know Goforth, but they’ve already communicated about next season.

“I know she had a pretty good freshman season at Oregon State,” Ramirez said Thursday. “I’m glad she’s coming here. We’ll work together, hometown, that’ll be cool. We texted [Wednesday], and we’re both ready to get to work with each other and the rest of this team.

“She’s long, can shoot the ball. She’s a good defender. I think that’s just going to bring another big piece to what we’re trying to do.”

Arkansas Coach Mike Neighbors said Goforth will provide leadership for a young Razorbacks team, which currently includes only one senior.

“Even though she’s got four years of eligibility, she’s got 20 games under her belt against quality opponents,” Neighbors said Wednesday. “And she got her freshman year, we all go through acclimation and transition. She was able to get, as she put it, ‘closer to home.’

“I stepped it off, it’s 84 steps from the [practice facility] door to Fayetteville High School campus. So I don’t think you can get much closer than that.”

The 2019 Arkansas Gatorade Player of the Year enjoyed a challenging season for the Beavers, which included playing in front of fans just once during the regular season. The 6-1 guard was named to the Pac-12 All-Freshman Team after helping Oregon State reach the NCAA Tournament before the Beavers lost in the second round to South Carolina. She averaged 11.6 points, 3.6 rebounds and 1.7 assists and shot 35.8% (24 of 67) from three-point range while starting all 20 games.

She learned plenty through the pandemic-filled season that included a pair of covid-19 pauses — one that lasted 29 days.

“I feel like I’ve gotten so much better and experienced something new, which is something I wanted to do,” Goforth said. “It didn’t work out, but I don’t regret a thing. It was great playing at a high level.

“I learned how to get through adversity. We were the team who had to take the most breaks. We sat out two weeks before we played Stanford, and we played them really close for three quarters. … I feel like I’ve grown a lot just getting through stuff.”

But ultimately being more than 2,000 miles away from her family, especially during a pandemic, was just too much, she said.

“I feel like covid really brought it out of me,” Goforth said after a deep sigh. “I already knew from the recruitment process it was going to be hard for me because I’m a homebody. I love my dad more than anything. My whole family is here.

“That was already a hard decision for me, then covid hit and I couldn’t see them at all. And it kinda put things in perspective for me. What’s important here might be bigger than basketball. It wasn’t an easy decision.”

Even though she knows it will likely be different next season as far as covid-19 is concerned, Goforth finally determined getting closer to home was what was best.

“It’s just not going to be what I need,” Goforth said. “I tried it out; what I need is to be near my family. That’s the type of person I am. I really appreciate Oregon State, the opportunity I was given and the experience I had.”

She also knew Arkansas was where she wanted to be. Goforth said other schools tried to contact her, but she told them she wasn’t interested.

“I’m really comfortable with Coach Neighbors, the team and everything he has going,” Goforth said.

Goforth hasn’t discussed the situation with anyone, but she has considered the high expectations that come with a Fayetteville native playing at Arkansas. She’s ready to deal with it.

“There’s a lot of buzz and stuff. Yesterday and today my phone hasn’t stopped. Everyone thinks pretty highly of me,” Goforth said with a laugh. “I’m hoping to live up to those expectations. But nobody has to have any doubt that I won’t work my butt off … I will do whatever’s best for the team, whatever my role is.

"I will work my butt off to help us win. Nobody has to worry about that.”