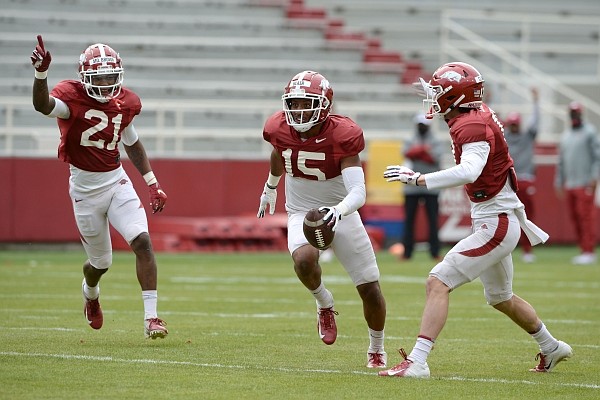 Arkansas defensive back Simeon Blair (15) celebrates an interception Saturday, April 3, 2021, with Montaric Brown (21) and Hudson Clark (right) during a scrimmage at Razorback Stadium in Fayetteville. Visit nwaonline.com/210404Daily/ for the photo gallery.

FAYETTEVILLE — Arkansas’ first-team secondary came to play in the Razorbacks’ second scrimmage of the spring on Saturday inside Reynolds Razorback Stadium.

It was not a banner day for accuracy for Arkansas’ quarterbacks, but its defensive backs played a role in that. On the final snap of the scrimmage, KJ Jefferson’s pass intended for receiver Mike Woods sailed a bit high and off his fingertips.

The Razorbacks’ defensive backfield, each player standing close to one another, let Woods and the offense have it after the fourth-down play. Second-year Arkansas coach Sam Pittman was pleased with the overall play and activity of the group.

“They’ve been playing well in practice as well,” Pittman said. “Any time you can do what you do in individual and you can do it as well or better in a team setting, to me that’s when you become a good player.”

Among the top performers, specifically with the top unit, was Simeon Blair, the redshirt junior from Pine Bluff. His day included a pair of pass breakups and an interception of Malik Hornsby after his pass was tipped into the air by receiver Jaedon Wilson.

Blair laid out for the ball and earned the takeaway.

He totaled 23 tackles in 2020, including six in Arkansas’ Week 2 win at Mississippi State and six more at Texas A&M. Blair’s work ethic has jumped out to Pittman since the end of last season, and his efforts are showing on the field.

“He’s got a lot of confidence. He’s always been a guy that will hit you,” Pittman said. “If you look back at him last season he really came firing out of the gates early and had a great game against Mississippi State and played well early, then he kind of tapered off during the middle then came back a little bit toward the end. We just talked to him about, ‘Hey, I want that guy and a better guy.’

“When we played LSU, I believe it was in the second half when we lost (Jalen) Catalon, we lost a lot of leadership in the secondary. We needed Blair to step up and be one of those guys, and he certainly has.

“I’ve been really pleased with him. Really physical guy. I love the kid.”

Additionally, Montaric Brown, a starting cornerback, tallied a pass breakup and made a couple of big hits on pass catchers. The same can be said for Catalon, who briefly left the field to have his shoulder examined by trainers.

The safety dropped freshman tailback Raheim Sanders behind the line of scrimmage on a designed run near the sideline. Catalon would have notched another big hit on Jefferson in the red zone if quarterbacks were not off limits for contact.

LaDarrius Bishop broke up another pass and Greg Brooks tallied an early tackle for loss on Sanders as well. Jon Conley, a defensive back from Fayetteville High, batted away a Lucas Coley deep ball into the end zone.

Jacorrei Turner, a 6-2, 197-pound redshirt freshman from Atlanta, had a deflection, too.

“A lot of guys look good over in individual, this, that and the other, blocking bag, breaking on air, all these type things,” Pittman said. “But what those guys have done, they’ve been able to take what they’re doing in individual each day … and they’re starting to do that in a game setting, in a team setting.

“Any time you can do that, you’ve turned yourself into a fine football player. The secondary is doing that right now.”