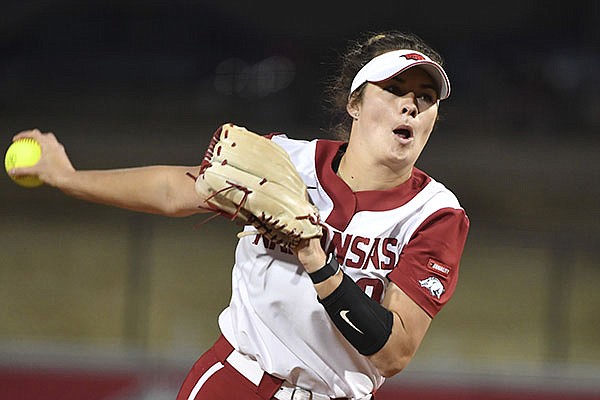 Shortstop Braxton Burnside went 3 for 4 and drove in all 3 Arkansas runs Friday, right fielder Aly Manzo was 2 for 2, and pitcher Autumn Storms threw a four-hitter to lead the No. 11 Razorbacks to their 11th consecutive victory with a 3-0 victory over the No. 25 Auburn Tigers at Jane B. Moore Field in Auburn, Ala.

The University of Arkansas (30-3, 11-0 SEC) took a 1-0 lead in the top of the third inning with the help of a two-out rally. Outfielder Hannah McEwen walked before Burnside doubled on a high fly ball that left fielder Tyler King lost in the sun.

Burnside made it 2-0 in the fifth inning with her 19th home run of the season. The lead grew to 3-0 in the seventh with another two-out rally. Outfielder Sam Torres extended her hitting streak to 10 games with a single and McEwen walked before Burnside hit a double to left-center field to score Torres.

Storms (4-0) registered her first complete game shutout of the season and the sixth of the season for the Razorbacks. It was her first since a 1-0 victory at Alabama on March 6, 2020. She threw 95 pitches — 60 of them for strikes — with 15 ground ball outs and two fly outs.

Auburn had one hit apiece from second baseman Sydney Cox, shortstop Makenna Dowell, right fielder Alyssa Rivera and designated hitter Lindsey Garcia. Shelby Lowe (8-3) took the loss for the Tigers (19-10, 1-7) after allowing all 3 Arkansas runs (all earned) on 7 hits with 2 walks and 12 strikeouts in a complete-game effort.

The Razorbacks, who lead the country in wins and are the SEC’s only undefeated team in league play, will look to sweep the series at 1 p.m. today on the SEC Network.