Razorbacks come alive in 7th, even series with Auburn 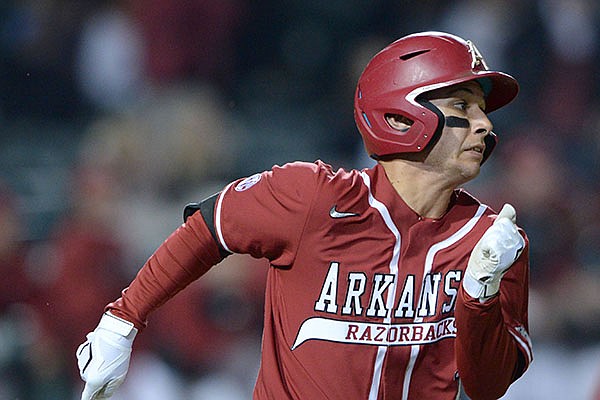 Arkansas second baseman Robert Moore heads to first after hitting a go-ahead RBI single during the seventh inning Friday against Auburn at Baum-Walker Stadium in Fayetteville. Arkansas scored five runs in the seventh to erase a 4-0 deficit en route to a 6-5 victory. More photos at arkansasonline.com/43auua/ (NWA Democrat-Gazette/Andy Shupe)

FAYETTEVILLE — The bats woke up just in time for the University of Arkansas to overcome a four-run deficit and wiggle past Auburn 6-5 on Friday.

The No. 2 Razorbacks (21-4, 6-2 SEC) scored five runs in a big seventh inning, then broke a tie with another run in the eighth without the benefit of a hit to even the series at 1-1.

Arkansas senior Kevin Kopps, who threw 39 pitches in a three-inning relief appearance on Thursday, retired the Tigers in order in the ninth inning to notch his third save.

He picked up for freshman Jaxon Wiggins (2-0), who allowed a tying run in the eighth inning.

Auburn (12-12, 1-7), which snapped a six-game losing streak with a 2-1 win in the series opener, will aim for just the second series win by an opponent at Baum-Walker Stadium since 2018 in today’s 2 p.m. series finale.

Arkansas, outhit 10-7 by the Tigers, continued a theme that had been prevalent from early in the season, notching its seventh win when trailing by three or more runs.

However, the Hogs had to labor through six innings before their slumbering bats awoke.

“Just really proud of the guys for hanging in there,” Coach Dave Van Horn said. “We were struggling offensively. We knew it was going to be tough to come back.”

Arkansas public address announcer Jon Williams got the crowd fired up during the seventh inning stretch just prior to the big five-run rally.

“We really noticed it,” Van Horn said. “We were pumped. I mean, I appreciate it. That’s what they’re supposed to do at home. That was awesome. They were loud. He did stir them up and I can’t tell you how much we appreciated that.

“Just a really good comeback win for our team. We had a knack for that early in the season. It was good to feel it in the dugout, that we felt like we could do it and they did it.”

Auburn Coach Butch Thompson said, “What we need was to just hold on to that lead. I thought we had enough cushion there, but did not.

“I tip my hat to Arkansas. To beat a No. 1 team you’ve just got to play a complete game there, and they got us in the seventh inning there. They called their pigs and the train’s coming by.”

The winning rally came without a hit as Carson Swilling (1-1) walked Cayden Wallace to open the inning, then Casey Opitz drew another walk after Wallace advanced on a wild pitch.

Power pitcher Blake Burkhalter hit Zack Gregory on the arm with a 3-0 pitch with one out to load the bases. Burkhalter had a chance to escape the inning after inducing a foul pop from Jalen Battles, but he uncorked a wild pitch that allowed Wallace to score the go-ahead run.

Auburn left-hander Jack Owen, who entered with a ERA north of 23.00, baffled the Razorbacks through 5 1/3 innings, holding them to a pair of singles by Christian Franklin and Brady Slavens and a walk drawn by Matt Goodheart. Owen, who kept the Razorbacks off-balance with pinpoint control on breaking pitches without an overpowering fastball, dropped his ERA to 7.04 with the scoreless outing.

Arkansas did not get a runner past second base, and only one as far as second, through six innings.

That changed in the seventh against righty relievers Trace Bright and Richard Fitts with the aid of two pinch hitters.

Franklin led off the inning with a first-pitch double against Bright, and he scored when right fielder Steven Williams mishandled Wallace’s single when he drew back to throw and the ball went behind him, allowing Wallace to reach second.

Opitz’s single to right field brought home Wallace. Gregory pinch hit and greeted Fitts with a shot deep to left-center field that caromed off the wall for an RBI triple. After Battles worked a walk, pinch hitter Cullen Smith drove a ball deep to center field that was held up by the wind but led to a sacrifice fly for a 4-4 tie.

The Razorbacks didn’t stop there. Battles stole second base and came home on Robert Moore’s line drive up the middle, which almost hit Fitts on the mound, to make it 5-4.

Goodheart then drew a walk against lefty reliever Brooks Fuller. Franklin followed with a scorching shot to the gap in left-center that threatened to break the game open, but Auburn center fielder Kason Howell made a running catch over his head near the wall.

The Razorbacks called on Wiggins in the eighth inning for a potential two-inning save with their 5-4 lead.

However, Brody Moore got hold of an outside fastball and drove it off the top of the wall in right field for a leadoff double. Moore went 4 for 4 on Friday and is 6 for 9 in the series. Wiggins induced a foul pop and got a strikeout, but Williams laced a single into left field to tie the score.

Auburn wasted no time in getting on the scoreboard as leadoff batter Ryan Bliss worked a full count against Zebulon Vermillion, then blasted a home run over the left-field wall.

Auburn scored a pair of runs in the third inning. Bliss singled and scored on Rankin Woley’s one-out single. Judd Ward, who had singled, scored when the Razorbacks tried to turn a 3-6-3 double play and replay overturned an initial out call at first base on Tyler Miller.

Peyton Pallette provided the Razorbacks with 4 1/3 innings of middle relief, allowing 1 run on a Williams home run, and striking out 5.