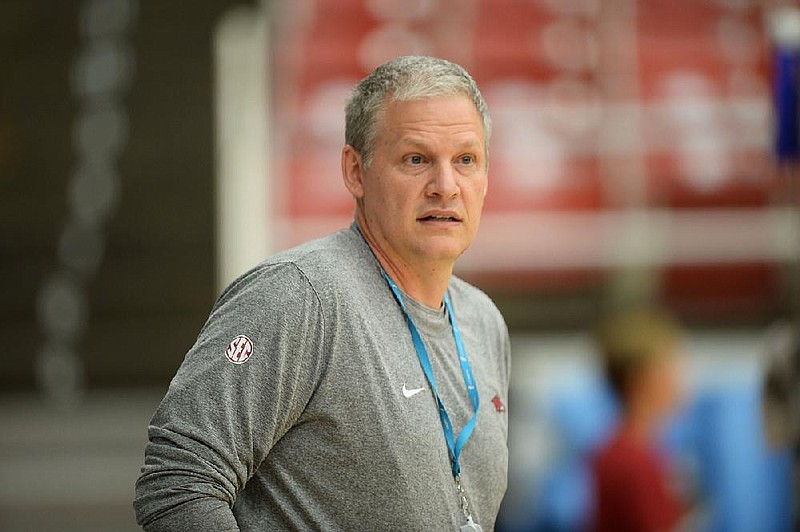 FAYETTEVILLE — The University of Arkansas volleyball team won its most SEC matches since 2003, but it still wasn’t enough to earn an NCAA Tournament bid.

The Razorbacks (14-8) were among the first four teams left out of the field of 48 teams, tournament chairman T.J. Meagher said on the NCAA Tournament Selection Show on Sunday afternoon.

The NCAA decided to slice the number of teams from the normal 64 to 48 in the fall and shift the championship to the spring because of the coronavirus pandemic.

Arkansas Coach Jason Watson said he felt like the Razorbacks would have been comfortably in the tournament field in a normal year, which turned out to be the case. He credited his team for continuing to compete throughout many challenges.

“Incredibly pleased and thankful that we had the season that we did,” Watson said. “And we get to do it again with some incredibly talented athletes that were recognized by the SEC. It’s exciting actually.

“The kids who left today’s selection meeting [were] really upset, but determined. I think that’s a good thing.”

Georgia Tech, Missouri, Notre Dame and San Diego were the last four teams in, while Arkansas, Tennessee, Kansas State, and Marquette were the first four out, according to Meagher.

The Razorbacks, who played an all-SEC schedule split between the fall and spring, finished fourth in the league behind Kentucky, Florida and Missouri. They split two matches against Tennessee and lost twice at Missouri in the fall, including a tough five-setter.

Arkansas was looking for its first NCAA bid since 2013. It hasn’t won a tournament match since 2005.

The Razorbacks walked away with several SEC honors, which were also announced on Sunday.

Watson, who is in his fifth season at Arkansas, shared SEC Coach of the Year honors with Kentucky’s Craig Skinner. The Wildcats won the SEC title and are the No. 2 overall seed in the tournament.

“I think SEC volleyball is poised to join the ranks of other sports that we have in the SEC like softball and women’s basketball,” Watson said. “To be recognized by that body of peers who are at the top of their game is quite humbling.”