Arkansas vs. UALR: How to watch and listen, forecast, pitching matchup, team comparisons 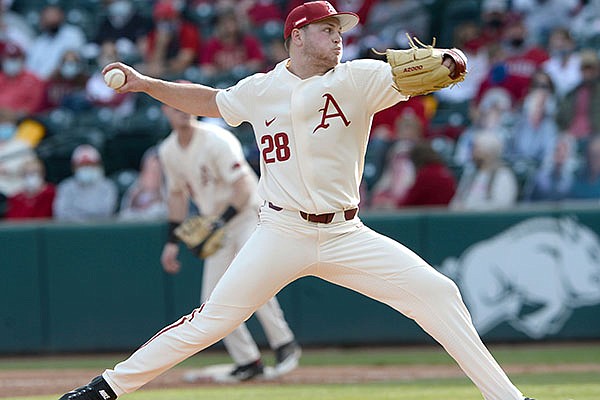 Arkansas pitcher Kole Ramage throws during a game against Memphis on Wednesday, March 24, 2021, in Fayetteville.

TELEVISION The game will be streamed by SEC Network-Plus and can be streamed via WatchESPN.com and the ESPN app (carrier login required).

FORECAST According to the National Weather Service, Tuesday will be mostly sunny with a high of 76 degrees and a low of 58 degrees in Fayetteville. There is a 50% chance of showers after 1 a.m., and south winds could gust up to 30 mph.

NOTABLE UALR coach Chris Curry was a volunteer assistant coach at Arkansas for two seasons in 2009 and 2010. The Trojans’ pitching coach, R.D. Spiehs, played for Dave Van Horn at Nebraska from 1999-2001….Curry is the third of five former Van Horn assistant coaches who will lead their team against Arkansas this season. The Razorbacks defeated Southeast Missouri State — coached by Andy Sawyers — four times and defeated Louisiana Tech — coached by Lane Burroughs — in two of three games. Former Van Horn assistants Tony Vitello and Rob Childress coach at Tennessee and Texas A&M, respectively, and are scheduled to play the Razorbacks later this season….Tuesday’s game is the first of two scheduled between Arkansas and UALR. They are scheduled to play again Wednesday at 4 p.m….UALR is one of four in-state opponents Arkansas will face this season. The Razorbacks defeated Central Arkansas 21-8 last Tuesday, are scheduled to play Arkansas-Pine Bluff twice next week, and are scheduled to play Arkansas State on May 11….Arkansas right fielder Cayden Wallace has a 10-game hitting streak….Arkansas is tied for the SEC lead and tied for second nationally with 46 home runs….Arkansas is 14-3 at home this season. The Razorbacks have a 122-24 record at Baum-Walker Stadium dating to 2017….Attendance at Baum-Walker Stadium will be expanded to 6,585 for games during the month of April. It previously had been capped at 5,735 for the final half of March. Attendance was capped at 4,218 to begin the season….UALR was swept by Arkansas State last weekend.