Diamond Hogs happy with their standing 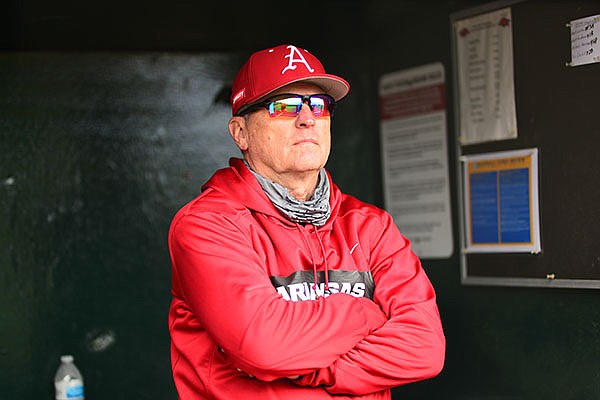 FAYETTEVILLE — The University of Arkansas remained at No. 2 in the USA Today coaches poll for the third consecutive week Monday after winning two of three games against Auburn in a series that featured all one-run games.

The Razorbacks (22-4, 7-2 SEC) trail only SEC East leader Vanderbilt (23-3) in fewest losses among Power 5 teams heading into a two-game set with the University of Arkansas at Little Rock, starting tonight at 6:30 at Baum-Walker Stadium.

“It’s been a good month for us, and it’s just beginning, really,” 19th-year Coach Dave Van Horn said in his monthly virtual Swatter’s Club meeting Monday. “I keep telling our team: Don’t get too up or down. Don’t get too excited about playing one team, because they’re supposed to be better than this team. If you do that, you’re going to lose. I think we’ve handled it pretty well so far.”

Preview of the Diamond Hogs' series vs. UALR

How to watch and listen: Arkansas vs. UALR

Van Horn had a few pieces of breaking news Monday, all concerning pitchers.

He said it is likely Peyton Pallette (1-1, 3.25 ERA) — who has performed well in long relief in back-to-back weekends — would get a start this weekend at Ole Miss, which would move Zebulon Vermillion back to the bullpen.

Van Horn also said junior right-hander Connor Noland (1-0, 5.40), who has not pitched since allowing three earned runs in one third of an inning in a 7-6 win over Murray State on March 5, has been recovering from a strain and is expected back in two to three weeks. Isaac Bracken, a grad transfer from Northern Colorado, is set to undergo surgery to repair an arm injury and should be ready to return for fall baseball.

The Razorbacks will have plenty of incentive for the midweek series against the Trojans, who hammered them 17-7 here in 2019.

However, the two-game set comes between the Auburn series and a three-game weekend at No. 3 Ole Miss in what will be the Hogs’ second top 5 showdown in the Magnolia State in a three-week span. Arkansas swept No. 4 Mississippi State on the road two weeks ago.

Van Horn, speaking in the Swatters Club forum, touted the Razorbacks’ healthy strength of schedule and their ranking in the Ratings Percentage Index (RPI).

“Right now the strength of schedule is ranked fourth in the country,” Van Horn said. “It was first. There’s a few things that play into that. … Our strength of schedule, I think it’ll move up. It could end up being No. 1 before it’s over with because of who we play and where we play them. If you play on the road at a ranked team, that really helps you.”

In addition to winning neutral site games against Texas Tech, Texas and TCU — currently ranked Nos. 8, 6 and 7, respectively, in the USA Today coaches poll — in the College Baseball Showdown to open the season, the Razorbacks have the three wins in Starkville, Miss., and two wins at current No. 19 Louisiana Tech.

“That series at Louisiana Tech, I think that was a great experience for our team,” Van Horn said.

Having the three game set at Oxford, Miss., looming should only enhance the Razorbacks’ strength of schedule.

“The team that’s ahead of us has only played like 12 or 13 [14] games,” Van Horn said. “They’ve won some games. If we keep winning with the schedule we’re playing, we’ll be fine. It’ll stay right where it is or move up one, which is all there is.”

Van Horn was most pleased with his team’s gaudy fielding percentage of .981, which ranks 11th nationally and first in the SEC.

The Razorbacks have 46 home runs, tied with LSU behind NCAA leader Old Dominion (50), and their 1.77 home runs per game ranks third in the nation.

“They have very good depth up and down the lineup,” Curry said. “Just good hitters that work counts.

“They’ve always had a flair for the big moments, the big hit, driving the run in. I think they expect when the game’s on the line, whoever is up is going to to get the hit.”

“I’d like it to be a little lower, but bottom line is we’ve been winning games and finishing games,” Van Horn said. “I think the ERA is gonna go back down.

“I feel good about the pitchers. We just need to get some better starts.”