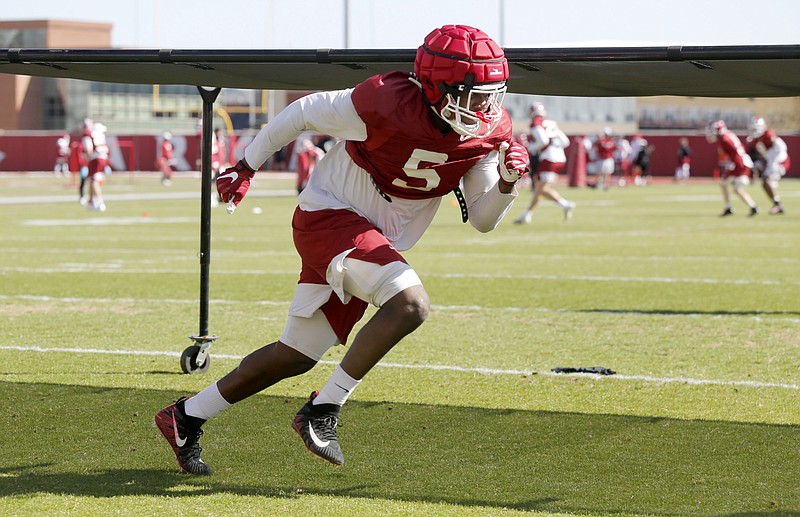 Dorian Gerald (5) participates in an agility drill during the University of Arkansas Razorback spring football practice Thursday, April 1, 2021, at the practice field on the campus in Fayetteville. (NWA Democrat-Gazette/David Gottschalk)

Arkansas hit the practice field today for the first time since Saturday’s second spring scrimmage. Here are a few notes and takeaways from the open viewing periods:

• The Razorbacks were in shorts, jerseys and helmets Tuesday, no shoulder pads. Prior to the team breaking out into position drills, the 1-3 offense faced off against the 1-3 defense for a handful of plays on the grass field. Toward the end, a pass was completed to Karch Gardiner about 20-25 yards downfield. Freshman defensive back Jayden Johnson got beat on the play.

As the defensive backs and Sam Carter jogged to the turf field for individuals, he got on Johnson and safety Malik Chavis pretty good. He told them repeatedly, “Do your jobs!”

• Later in practice in some light contact team work, Hudson Clark broke up a pass on the far sideline. His break was really solid, but the pass was poorly thrown. Running back Josh Oglesby had a nice run up the middle of the field, and Malik Hornsby had what would have probably been a 25-30 yard run after making the right play on a zone read.

• Early on, Arkansas worked some deep red zone stuff, and the offensive line and a tight end blocked for a running back against a four-down defensive front, two linebackers and a pair of safeties. Sam Pittman really got on the second-team defensive group that ran out there for this drill. He was livid with Marcus Miller and another player for lacking urgency getting off the field.

It was as animated as I’ve ever seen Pittman, who made them jog on and off the field twice without going through a rep. He stopped the entire drill to get his point across, and the pace of the players on both sides picked up getting on and off.

• The Razorbacks worked quite a bit with a four-down front defensively today. It was among the first practices I can remember them doing so. The first-team group was (L–>R) Dorian Gerald, Eric Gregory, Taurean Carter, Zach Williams. I think Isaiah Nichols would have been running in Carter’s spot had he been available. He exited the scrimmage early on Saturday with an ankle injury.

• Working at punt return today was Nick Turner and Trelon Smith. The running back got a handful more reps than Turner did from what I could tell. It would be interesting to see Smith field punts this season. It also could have been another way for him to become more sure-handed. I didn’t see either player drop a punt.

During the special teams work, Scott Fountain had to stop a rep 2-3 times before it began to get players lined up correctly. Reid Bauer and Sam Loy had a couple of nice punts with the wind. They didn’t exactly kick it well in the scrimmage, I didn’t think.