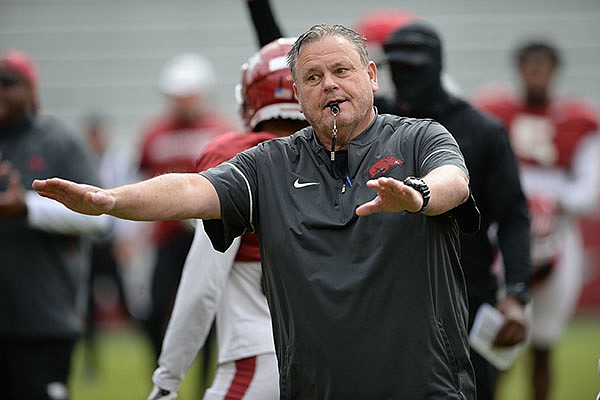 Arkansas coach Sam Pittman is shown during a scrimmage Saturday, April 3, 2021, in Fayetteville.

After over a year of adapting recruiting due to the coronavirus pandemic restrictions, Arkansas head football coach Sam Pittman is ready for a normal, crazy June.

That’s when it’s expected that high school prospects will finally be able to take official visits to college campuses after not being able to do so since March of 2020.

The NCAA Council met Wednesday and Thursday with the intent of ending the dead period.

“It’s very important and very exciting,” Pittman said during a zoom media conference previewing Saturday’s Red-White game. “You look at last year and these guys making college decisions and never had the opportunity to step foot on campus for the most part.

“If you really think about it, it’s kind of crazy. But it was what it was and the NCAA did a nice job with allowing kids to come on their own and at least see the area, the downtown and things of that nature, dormitories and whatever that might be.”

Arkansas has four of its recruits set for official visits on June 4-6, including Detroit Bellville four-star defensive back Myles Rowser (6-1, 180).

At least eight other known prospects are hoping to take officials to Arkansas in June while some others are looking to do so when the Razorbacks host Texas on Sept. 11.

“I love the set up of how the NCAA has five officials and things of that nature,” Pittman said. “They have earned the scholarships and should be able to go visit as many schools as they are interested and at the end of the day be able to make an educated decision on where they want to spend their time.

“We are very excited about it. We know June is going to be really crazy, but if you really look back on it, every June is crazy. There might be a few more.”

Arkansas also hopes to have football camps in June and July, something that Pittman feels is important in evaluating prospects.

“I don’t know if they are voting on that right now, today and tomorrow,” he said. “But what we understand, if everything passes, it’s going that direction than basically our June will get back to the old calendar.”

The NCAA Council is also expected to vote on immediate one-time eligibility, which will likely find even more players getting into the transfer portal.

“We’ve got a basketball coach who is really using the transfer portal to Arkansas’ advantage,” Pittman said of Razorback head basketball coach Eric Musselman. “For me, it’s more of a pick and play. It would be very source of need, and we would need to know the guy. I really would like for him to have played so we can see game tape on him.

“Like a Feleipe Franks. I was fortunate to have played against him there at Florida when I was at Georgia. I was able to see him not only on tape, but see his mannerisms on and off the field.”

Pittman would be filling a need.

“Well, we might take a tight end,” Pittman said. “But I’d like to be able to get in 12-personnel, two tight ends on the field at the same time. The bottom line is whoever we took, it would have to be a D-lineman or somebody with the ball in his hand. I don’t think we’d take an offensive lineman in the portal right now.”

Pittman thinks it’s fair for players to be able to transfer, but doesn’t want yearly transfers.

“I do think that it’s going to pass, and I do think it could be very good for the kids, “Pittman said. “I know we all sit here and say, well if you make a decision then we’re teaching these kids that quitting or leaving or moving is OK, and all that. But if you look at it in the coaching world, coaches are able to go take different jobs, and they do.”

“That was one of the biggest things about leaving Georgia, the signing date was probably 10 days away, maybe 14 days away, and we had five offensive linemen committed, and I had the right to come to Arkansas and be the head coach,” Pittman said.