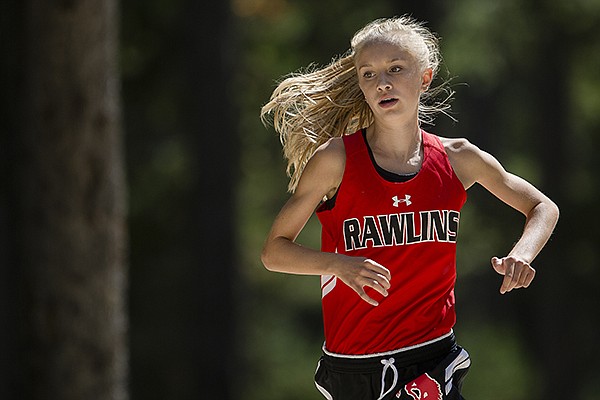 Distance runner Sydney Thorvaldson competes for Rawlins (Wyo.) High School. Thorvaldson, who will compete in the fall at Arkansas, was named the 2021 Gatorade national distance runner of the year. (File photo courtesy Casper Star-Tribune, with permission)

FAYETTEVILLE — A signee with the University of Arkansas women’s cross country and track and field program is a Gatorade national award-winning high school distance runner for the second consecutive year.

Sydney Thorvaldson who is from Rawlins, Wyo., and signed with Arkansas last fall, was announced this week as Gatorade’s 2020-21 national girls cross country runner of the year.

“I’m pretty close with Taylor,” Thorvaldson said. “She helped me navigate through the whole recruiting process. When I took my unofficial visit to Arkansas, she showed me around.

“To see that she got [the Gatorade national] award, and now me, I think it just goes to show that Arkansas really is going to be a great program. It already is. Hopefully I can help make it better.”

“She was on everybody’s recruiting list, because she’s been at the forefront her entire career,” Arkansas Coach Lance Harter said of Thorvaldson winning or finishing in the top three at several national high school races. “She made a mark very early in her career, and she’s just continued to develop.

“I think she’s going to be a great asset for us in the years to come. She’s a phenomenal talent.”

“We have a phenomenal freshman class that’s coming in next year,” Harter said. “Sydney’s an integral part of it.”

Thorvaldson said she first was contacted by Arkansas as a high school junior and after learning more about the program had it among her top choices.

“I really just felt like it was the perfect fit for me after visiting,” Thorvaldson said. “The community really supports the athletes, and then the facilities, coaching and team are all phenomenal.

“And I felt like they wanted me as more than just an athlete, but also as a person, a student. Everything just kind of matched up with what I saw as the perfect college.”