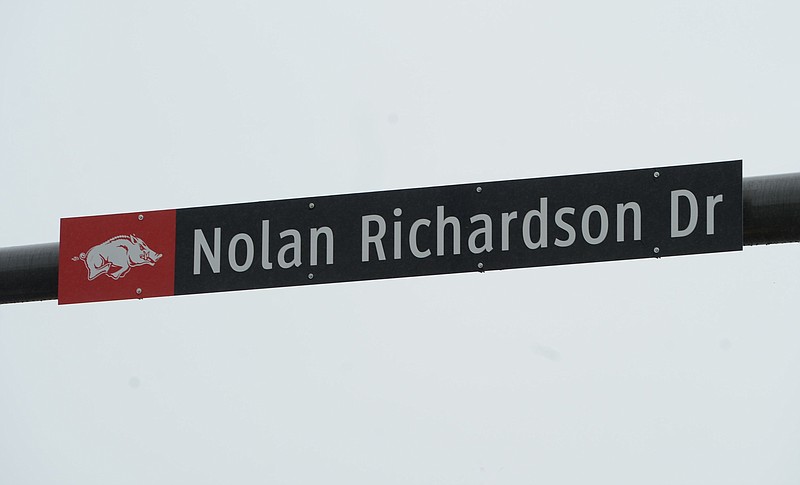 A sign marking Nolan Richardson Drive hangs Friday, April 16. 2021, on a utility pole over Razorback Road following an unveiling ceremony for the newly renamed street on the University of Arkansas campus in Fayetteville. The Fayetteville City Council voted last month to rename what was known as Leroy Pond Drive to Nolan Richardson Drive, in honor of the national championship-winning former head menÕs basketball coach of the Arkansas Razorbacks. In turn, what was known as Government Avenue leading to Fayetteville National Cemetery will be renamed Lt. Col. Leroy Pond Avenue, in honor of the World War II veteran awarded with the Purple Heart, Silver Star and other awards, who was wounded in Germany and died in 1945.

FAYETTEVILLE — The city of Fayetteville officially renamed a street outside of Bud Walton Arena after Nolan Richardson on Friday.

The Fayetteville City Council unanimously voted March 16 to rename Leroy Pond Drive for Richardson, who was the Razorbacks' basketball coach from 1985-2002. The street runs along the south side of the basketball arena.

Richardson is the only coach to win an NCAA basketball championship at Arkansas, which he did in 1994. Richardson won a program-record 389 games and led the Razorbacks to the Final Four three times.

In 2014, Richardson was inducted into the Naismith Memorial Basketball Hall of Fame, the highest individual career achievement in the sport.

The floor at Bud Walton Arena was dedicated as Nolan Richardson Court in 2019. There is also a banner with Richardson’s name hanging inside the arena, and a museum area highlights several of his accomplishments. Bud Walton Arena opened in the fall of 1993 while Richardson was the Razorbacks’ coach.

The street had been named for Pond since before the arena was built. Pond, a Fayetteville resident and UA graduate, died in 1945 from injuries he suffered in action while serving in the Army during World War II. Pond participated in D-Day and received numerous medals for his service, including the Silver Star and Purple Heart.