Politics have mixed with sports in past 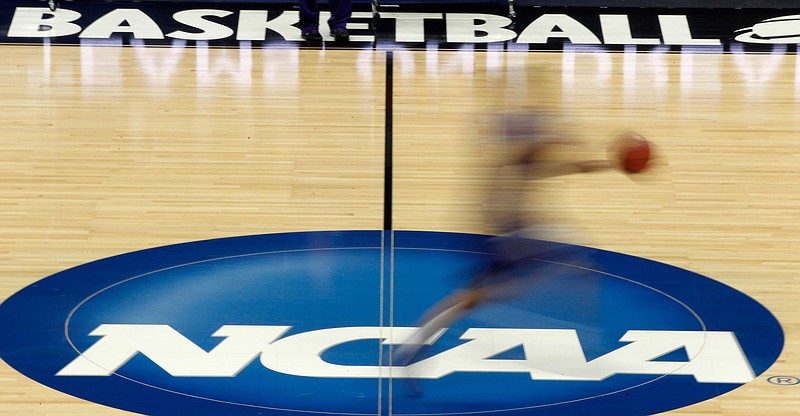 FILE - In this March 14, 2012, file photo, a player runs across the NCAA logo during practice in Pittsburgh before an NCAA tournament college basketball game.

FAYETTEVILLE — If the University of Arkansas’ bids to host NCAA men’s baseball and women’s softball regionals in May become politically compromised, it won’t mark the first time that Arkansas’ state legislature has stepped in it regarding the Razorbacks.

Arkansas and Idaho are among states recently passing or pondering legislation banning transgender athletes from participating in women’s sports.

Seems the NCAA is listening.

“The NCAA is concerned with the numerous bills that have been filed across our country related to sport participation,” NCAA President Mark Emmert wrote. “As we have previously stated in situations such as Idaho’s House Bill 500 and its resulting law, this legislation is harmful to transgender student-athletes and conflicts with the NCAA’s core values of inclusivity, respect and the equitable treatment of all individuals.”

The NCAA’s Board of Governors also expressed concern.

“The NCAA Board of Governors firmly and unequivocally supports the opportunity for transgender student-athletes to compete in college sports,” it communicated in a statement. “Our clear expectation as the association’s top governing body is that all student-athletes will be treated with dignity and respect. We are committed to ensuring that NCAA championships are open for all who earn the right to compete in them.”

The Board of Governors stated it “will continue to closely monitor these situations to determine whether NCAA championships can be conducted in ways that are welcoming and respectful of all participants.”

That’s not a direct threat but perhaps a veiled one regarding the Razorbacks’ nationally No. 1 baseball team and nationally No. 10 softball team hosting regionals they currently well deserve hosting.

It could menace the UA hosting future NCAA Indoor Track and Field Championships.

At least this latest issue presumably won’t get the U of A tossed from the SEC like a previous one threatened.

That was the 2017 bill allowing concealed guns on campus which, until frantically amended, included sports events on campus.

Common sense made sport of the State of Arkansas compelling the University of Arkansas allowing guns at Razorbacks games while the UA adhered to SEC policy banning umbrellas because they can impede the vision of neighboring fans.

Good luck finding officials willing to referee football games in a stadium with loaded guns and inevitably some alcohol-loaded fans.

In these times it does seem what’s politically popular with some and unpopular with others ranges to extremes.

Like with the guns bill, some legislative audibles may be required.