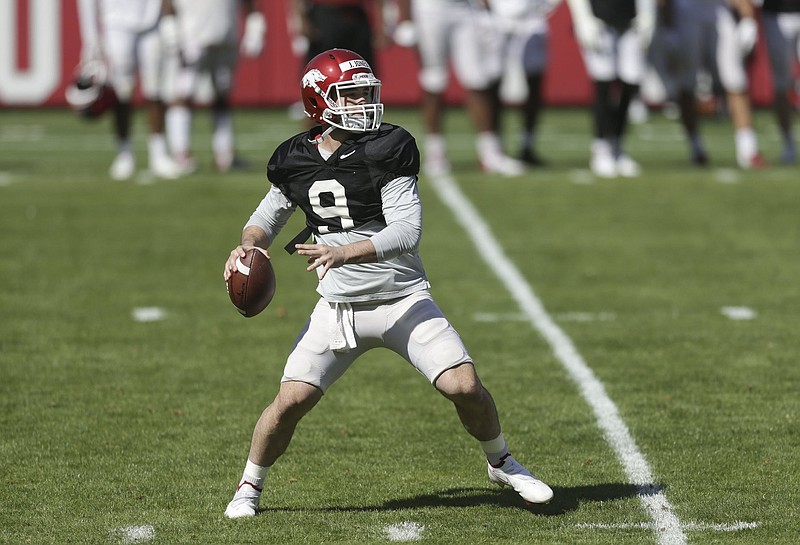 FAYETTEVILLE — John Stephen Jones was the standout in a quarterback target practice game in spring workout No. 14 this week for the University of Arkansas.

While most of the rest of the team engaged in punting and other special-teams work, the quarterbacks went to the north end zone on the grass field outside the Walker Pavilion and had some fun.

The players set up a large football-catching basket — an angled, rolling contraption — in the back left corner of the end zone and split up into teams for competition. The quarterbacks took snaps from the left hash, middle of the field and the right hash from around 10-plus yards, then did it again, from about 15-plus yards. The goal was to throw fade route-style passes to the corner and into the basket.

If passes didn’t have enough arch, they didn’t count. The scoring went 1 point, 2 and 3 across the field from the shorter distance, then 4 points, 5 and 6 from the longer distance. Offensive coordinator Kendal Briles made a few throws during the competition, which appeared to be a 3 on 3.

Jones appeared to be the high scorer with consistent makes across the board, including his 6-pointer.

Jefferson, Hornsby and Coley struggled on the first three passes, with Jefferson pointing out he needed to be throwing with his shoulder pads on. Jefferson led a comeback on the three longer throws with the sophomore warning, “I’m getting hot!” The rally came up short.

Tipped interceptions were a thing in team periods during the week.

On Tuesday, safety Joe Foucha delivered a good blow to receiver John David White as a pass from KJ Jefferson was arriving. The ball caromed away from the point of contact and linebacker Grant Morgan, who had dropped into coverage and then followed the play, wound up with the tip-drill interception. Foucha’s shot was not a targeting-type hit, but it knocked White’s helmet off.

On Thursday, a pass over the middle was popped into the air, where safety Malik Chavis had it measured and heading into his hands. However, he was hit just as the ball arrived, leading to another carom, which linebackers Christopher Paul and Jackson Woodard co-possessed for an interception as both went to the grass.

Coach Sam Pittman has been more informative regarding injury information this spring, but on Wednesday he indicated that would’t be continuing into the fall.

After answering a question about who wouldn’t be available for the Red-White Game, Pittman remarked, “And by the way, that’s a good time to ask about injuries in the spring, because in the fall the answer will be crickets.”

Nichols and Stewart wore regular practice jerseys in Thursday’s practice in helmets and shorts, but defensive line coach Jermial Ashley pulled Stewart from a drill after the sophomore tried to sneak his way in. Stewart appeared to be favoring his right leg during individual work prior to the drill.

In recent days, freshman linebacker Marco Avant returned to active participation after missing time during the first few couple of weeks of spring.

Asked on Wednesday who had been pleasant surprises during the spring, Sam Pittman pointed out defensive linemen Taurean Carter and Zach Williams and safety Simeon Blair, who will be probable starters today, then he segued into a couple of early enrollee freshmen.

“A young guy, Pooh [Christopher] Paul has come in and learned the defense and done a really nice job,” Pittman said. “Jayden Johnson there at safety has surprised me with his ability to learn the defense and get where he’s supposed to be with the physicality that he’s playing with.”

The NCAA Division I Council voted to reinstate recruiting activities starting June 1, ending a 14-month dead period brought about by the coronavirus pandemic. The ending of the dead period will allow official and unofficial visits to campuses in June, which brought a smile to Coach Sam Pittman’s face when asked about it Wednesday.

Recruits have not had in-person contact with coaching staffs since March 2020.

“It’s very important and very exciting,” Pittman said. “You look at last year and these guys making college decisions and never had the opportunity to step foot on campus for the most part. If you really think about it, it’s kind of crazy.

“But it was what it was, and the NCAA did a nice job with allowing kids to come on their own and at least see the area, the downtown and things of that nature, dormitories and whatever that might be. They have earned the scholarships and should be able to go visit as many schools as they are interested in, and at the end of the day be able to make an educated decision on where they want to spend their time.

“We know June is going to be really crazy, but if you really look back on it, every June is crazy.”

Cook, who turned 28 on April 13, played his junior and senior seasons at Arkansas in 2013-14 under Pittman.

“I hope he’s on a better track than I was, but I’m really proud of him, proud that he was able to get the head coaching job,” Pittman said. “I think he’ll do an outstanding job.

“I certainly called a lot of different people for him when he was trying to interview for different jobs, so I’m proud of him. He knows how to treat people and knows how to motivate and he knows football. He’ll do a really nice job.”