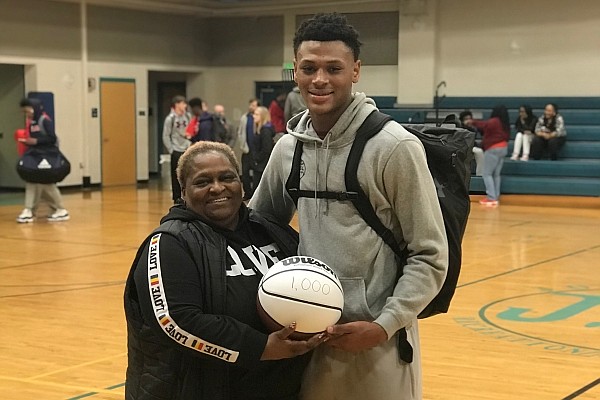 University of Arkansas transfer Au’Diese Toney will play his third season without his biggest fan and grandmother Harriet Toney-Cotton when he steps on Nolan Richardson Court at Walton Arena in the fall.

Toney-Cotton and her grandson were inseparable until she died after a battle with cancer at age 58 on June 26, 2019.

“He’s the first grandchild of four grandkids,” Toney’s mother, Tee Toney-Teague, said. “He was the only grandbaby for five years before the second grandchild came. That’s why she had him spoiled rotten.”

Toney-Cotton’s spoiling began immediately after he was born.

“She wouldn’t let anyone else hold him, babysit him or put him to bed,” Toney-Teague said. “She would sing to him, always prayed with him, and be that calming voice. She attended every single game from little league all the way up to his college games.”

When Toney signed with Pittsburgh in 2018, grandmother and grandson had to adjust to not seeing one another.

“It was tough at first, but she called every day,” Toney said. “She went and bought an iPhone just so we could FaceTime each other.

“But she was excited and pumped. She had me buy her all the gear because she wanted to show everyone that I was going off to college.”

Harriet Toney-Cotton was diagnosed with breast cancer in 2012. She overcame the disease once, only to see the cancer come back aggressively in 2018.

“She hid it from us until like maybe 30 days before she passed away,” Toney-Teague said. “It was unexpected for us.”

Toney was at the Pittsburgh airport trying to get back to Huntsville, Ala., to say goodbye to his ailing grandmother, who was in a coma. He exchanged texts with his mother for updates.

“I just had thoughts in my mind like I can’t lose her. I wouldn’t know what to do without her,” he said. “I remember just looking at the clouds, praying and hoping everything was OK.”

His flight arrived in Charlotte, but his connecting flight to Alabama was delayed. Thoughts of not seeing his grandmother before her passing entered his mind.

After arriving in Alabama, Toney’s godfather picked him up at the airport. He expected to go to the hospital, but instead they headed to his grandmother’s house.

“I was thinking everybody is there to pray and hoping she gets well,” Toney said. “I went inside and said, 'Where’s my granny?' I remember my mom, my aunties and cousins walked in with me, and my mom said, 'She didn’t make it.'

“I thought everything in my body left. I felt like it was a bad dream that I couldn’t wake up from.”

“I just always remember the support and love she had for me,” he said. “She always saw me as a star, and I always knew she wouldn’t let me fail. That sticks with me to this day. She’s not going to let me fail, and I am not going to fail her.”

He affectionately called her “Granny Baby,” and she the same to him.

“She was my everything and I was her everything,” said Toney, who has a tattoo of his grandmother on his left leg. “I could do no wrong in her eyes.”

His grandmother’s faith was strong.

“My fondest memories of her, she would always pray for me before every game,” Toney said. “She did this since I was old enough to play the game. She also attended every game I ever played, even when she was sick.”

When others mispronounced her grandson’s first name, she set them straight.

“Some people didn’t know how to say his name, and she would get mad and just say, 'Call him DC,'” Toney-Teague said. “She was a character.”

His grandmother was a tough-minded, fun-loving people person.

“She was always the life of the party,” Toney-Teague said. “She didn’t take any mess off anyone, so that’s where we get our toughness from. She never met a stranger.

"She would always tell people when she first met you to either call her granny, auntie or big dog.”