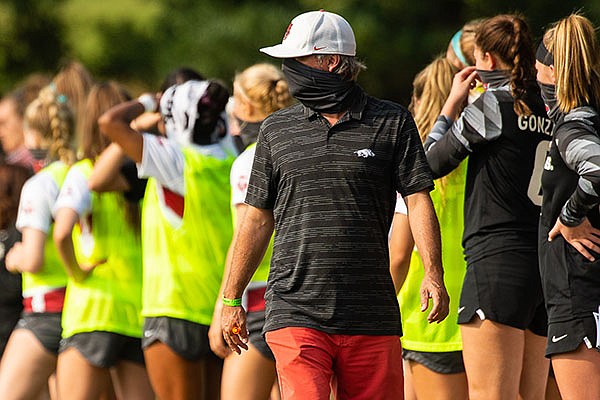 Arkansas soccer coach Colby Hale stands in front of his players during a game against LSU on Saturday, Sept. 19, 2020, in Fayetteville.

The University of Arkansas women’s soccer team earned the No. 6 national seed when the 48-team NCAA Tournament field was announced Monday.

It’s the second consecutive season Arkansas (11-3) has been a national seed. It’s also the Razorbacks’ seventh NCAA appearance in the past eight seasons, all under coach Colby Hale.

Arkansas earned a first-round bye and will take on the Memphis-Utah Valley winner at 3 p.m. on May 1 at East Carolina University in Greenville, N.C. Santa Clara (7-1), the No. 11 national seed, is a potential third-round opponent for the Razorbacks.

“We have a bye and the team you play in the second round is gonna be a good team,” Hale said. “We’re excited to play.”

Hale thought the Razorbacks would be seeded somewhere between 3 and 6, saying several of those teams are similar to Arkansas. For instance, TCU earned the No. 4 seed, but it lost recently to Texas A&M, which is the No. 7 seed. Arkansas blanked the Aggies 2-0 in the fall.

The Razorbacks will leave for North Carolina — where the entire tournament will be played — on April 29, Hale said. He’s still trying to get more details about accommodations.

Either way, he believes his team will be ready after dealing with a disjointed season that’s spanned almost nine months. The NCAA Tournament was pushed from fall to the spring by the NCAA because of the coronavirus pandemic.

The Razorbacks, who have four wins over ranked opponents, won the SEC regular-season title and lost in the tournament finals to Vanderbilt in the fall. They have played just four matches in the spring.

Hale decided to give his team some time off during the spring to hopefully have them ready for postseason.

“We believe that’s going to produce a fresh, hungry, ready-to-play team,” Hale said. “What we’re gonna lack in training, hopefully we’ll gain in freshness. They needed some time. It was a grind in the fall. Now we have a grind again.”

He likened the season during the pandemic to being in a pottery class.

“It’s like you’re making a coffee mug for your mom in high school and you get part way through it and you’re like, ‘Man, this coffee mug sucks,’ ” Hale said. “Now, we make it a bowl. Ahh crap, this bowl sucks. Well, let’s make it a plate.

“Just kinda figured it out as we went, and I think we found a really good mix. The players, I think, are in a good place.”