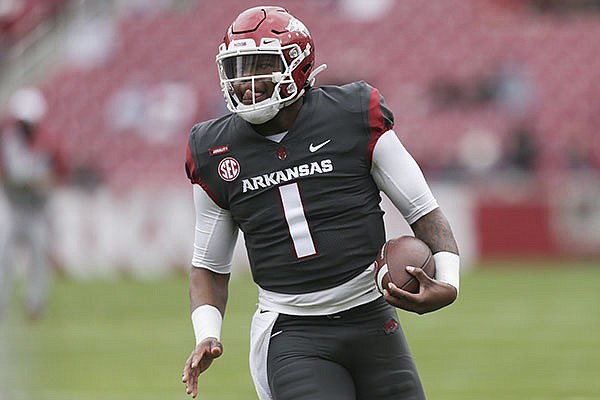 FAYETTEVILLE — KJ Jefferson heads toward the end of the school term and upcoming summer workouts comfortably in the QB1 spot at the University of Arkansas.

But there’s no time to get comfortable for the 6-3, 240-pound redshirt sophomore after holding on to the top job on offense throughout the 15 practices of spring.

“Basically, I build off the confidence and trust in my teammates,” Jefferson said after Saturday’s Red-White spring finale. “Each and every day I try to at least grab one O-lineman, and I work with him. Just so I can trust him, and he can trust me, and just keep doing that throughout with all my teammates.”

Second-year Arkansas Coach Sam Pittman touted the leadership skills of Jefferson throughout the spring and the trust his teammates are putting into the third-year quarterback from Sardis, Miss.

“I think he’s certainly maturing,” Pittman said Saturday. “He’s got command of this team. His teammates believe in him. That’s hard. You have to earn that at quarterback and he certainly has.”

For die-hard Razorback fans, this is an intriguing offseason when it comes to quarterback play. After two seasons in 2018-19 with a seemingly revolving door at quarterback where Ty Storey, Cole Kelley, Connor Noland, Ben Hicks, Nick Starkel, John Stephen Jones, Jefferson and Jack Lindsey all made starts during a 22-game span for a sputtering, flailing offense, first-year offensive coordinator Kendal Briles found a strong, stabilizing veteran presence at quarterback in 2020.

Feleipe Franks completed a school-record 68.5% of his passes in last year’s 10-game season, spiced with a tidy 17-4 touchdown-to-interception ratio. Though Franks’ play had its ups and downs, like holding on to the ball too long on occasion, leading to 34 sacks, the graduate transfer was sturdy and capable and potent with the long ball. Franks’ calming presence allowed Jefferson to get busy in full-time understudy mode as the clear second-team signal caller.

When he was needed to make a start at Missouri late in the season, Jefferson was ready. Not only did he produce solid numbers — 18 of 33 for 274 yards and 3 touchdown, plus 32 rushing yards and another touchdown — in the road environment, he coolly engineered a last-minute touchdown and two-point conversion drive that should have been a game-winning series.

That’s the kind of endearing effort which encourages teammates and fans to rally behind a quarterback.

While Jefferson had plenty of learning moments in the spring against the aggressive Arkansas defense and what is thought to be a swiftly improving secondary, he looked solid in the Red-White game while facing mostly four-man pressures.

He and Briles focused hard on his footwork and the resulting accuracy in the early parts of spring, as well as quickly recognizing different defenses and coverages.

“Coming out of spring I feel like I grew and matured a whole lot from where I was when we first started spring,” Jefferson said.

Jefferson said drill work and repetition helped him bump up his completion percentage as spring wound to a close.

“I attribute it to a drill we do starting off practice with Coach Briles mechanics-wise, quick releases, giving a target and trying to hit the target every time, rolling out, hitting targets,” he said. “Just the main thing was focusing on the small, mechanical stuff that can be fixed easily.”

“Definitely throwing, his mechanics, velocity, everything on his ball,” Catalon said. “You can tell he’s been focusing on it for sure. I think his maturity, he’s come in and gotten a lot more mature as time went on. You saw him grow up fast.

“I think he realized the situation he was in, he was going to have to lead this offense. He’s done a really outstanding job of that, and he definitely has the whole team on board. Hats off to him for taking that role and filling in the shoes. He’s filling Feleipe Franks’ shoes and he’s done a really good job, and everybody feeds off of that.”

One part of Jefferson’s game that fans have only seen small glimpses of is his running attributes. After the solid performance at Missouri, Jefferson suffered a sprained knee on a quarterback run up the middle the following week in a home loss to Alabama.

Pittman said prior to spring that Briles’ concepts are built more for running quarterbacks than the system in place for Franks last year.

“We can make moves with our designed runs,” Franks said. “I feel that once we get into the season and start coming at the defense with designed runs when they load the box, it’s good for us on the offense. We can go over the top when they bring the safety into the box or when they’re in man get matched up with the outside receiver and make plays.”

Jefferson’s top backup through spring drills was redshirt freshman Malik Hornsby, whose playing time last fall was less than what Jefferson received during his first season in 2019.

Hornsby has displayed his running talent in numerous scrimmage settings, but he did throw into coverage on at least three occasions in the Red-White game without suffering an interception.

Still, Pittman liked what he saw out of the top two quarterbacks in the game, saying he was “really pleased” with Jefferson and Hornsby.

Pittman also noted the expanded playbook with designed quarterback runs will benefit Jefferson and the offense come the fall.

“I just think that when we’re able to run him he’s going to become a very, very, very good quarterback for us,” Pittman said. “Right now, obviously with tagging off, you’re not calling any type of quarterback runs because they’re not going to give them many yards. If you block it off good and get tagged, it’s down plus 2 [yards]. … I do believe because of that situation he became a better thrower this spring.”