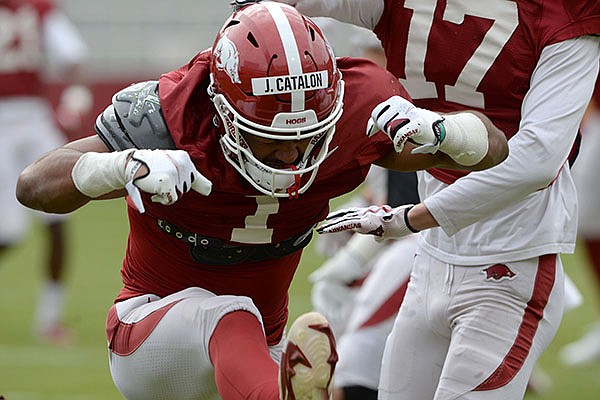 FAYETTEVILLE — There’s an adage in baseball about the best teams being “strong up the middle” at catcher, shortstop, second base and in center field.

The same can be true for football, where a lineman-swallowing nose tackle and a see-all, instinctive middle safety can thrive as the backbone of a sturdy defensive unit.

At the University of Arkansas, that tandem could be manned to some degree by high school teammates Taurean Carter and safety Jalen Catalon in 2021.

With returning starter Isaiah Nichols mostly out of the lineup due to an ankle issue in the spring, Carter got extended action at the nose and came on so strong that Coach Sam Pittman was bringing his ascension up to reporters when asked: “Who flashed this week?”

Perhaps it was no coincidence that the final two video conferences of the Razorbacks’ spring drills — in which one offensive and one defensive player took part — Carter participated in one, then Catalon represented the defense in the other after the Red-White Game.

The teammates from Mansfield (Texas) Legacy High School, in their third season with the Razorbacks, take their football seriously.

“The thing you need to know about them is they really, really care about winning, OK?” Mansfield Legacy Coach Chris Melson said last week. “They don’t just want to play. They want to win. That’s different. It’s not about, ‘I want to get mine.’ It’s about, ‘We’re going to play hard together and we’re going to win.’ ”

Catalon earned his “team spokesman” credentials — along with other defensive standouts such as Grant Morgan, Montaric Brown and Bumper Pool — with a phenomenal redshirt freshman season in 2020. The 5-10, 198-pounder logged 99 tackles, 2 forced fumbles, a fumble recovery, 3 interceptions and 4 pass breakups.

“And if you’re the greatest high school football player, you’re probably going to be a dang good college football player. So I told the recruiters when they came in, ‘Jalen’s not just a D-I defensive back, he’s a Thorpe Award type of player.’

Former Arkansas coach Chad Morris had similar praise when he grouped Catalon among the five greatest high school football players he had ever recruited, along with quarterback Deshaun Watson and others.

Catalon played very sparingly as a true freshman, battling a shoulder injury along the way as the Razorbacks struggled to a second 2-10 season.

While Catalon was establishing himself in 2020 and helping the Razorbacks regain some respect in Pittman’s first season, Carter was earning a moderate amount of playing time, including one start vs. LSU. The 6-3, 300-pounder accumulated 11 tackles and a pass breakup while working behind Jonathan Marshall, Nichols and Xavier Kelly.

Carter has been reshaping his body in his first couple of years on campus.

“Now, I realize that [280] is kind of tough to play with and be stout on the D-line. You just get pushed around everywhere. So, I picked my weight up to 300, but I’ve been working out and stuff so it’s kind of hard to keep it maintained. But, I’m a solid 298 right now.”

Pittman openly praised Carter in front of reporters on the Tuesday of the Red-White Game, saying he deserved a spot at the front of the drill line and his ascent to the first defense came because he was straining more at practice.

“He’s a guy that is a grinder,” Melson said. “He’s a worker. He believes in himself. He’s so competitive and determined to be successful.

“When a guy has a mindset that, ‘Hey, I’m doing this, whatever it takes. I’m not going to quit. I’m going to keep fighting through stuff until I get it done.’ That’s kind of how he’s always been. He’s a warrior.”

Carter was asked Thursday what he wanted to see in the Red-White Game, and his response echoed Melson’s assessment.

The Red team won the game 30-20, with Catalon racking up a team-high 6 tackles, including 4 solo stops, and Carter having 1 tackle.

As freshmen at Mansfield Legacy, Catalon, Carter and former Razorback Enoch Jackson helped lead the freshman team to its only 10-0 record.

During their junior year, Carter suffered a broken foot in the state semifinals and didn’t play much in a last-minute loss. Catalon and several other key team members were hurt the next season in 2018.

“They probably could have won state twice if they’d stayed healthy,” Melson said.

Catalon’s mentality and decision making are next level as Melson sees it.

“He doesn’t hesitate,” he said. “I mean, he really, really, really, really wants to make the play. When you tell him to read something … what I told him was if No. 2 does this, you do that. If the tight end does that, you do this. As soon as he saw him do whatever he was taught to do, he was gone. He didn’t blink. It was over.

“He trusted it and he just, he’ll run past people to make plays. Whereas some guys are unsure of themselves. He’s very confident and he’s very smart.”

Catalon said the Arkansas defense is learning to play tougher because of its experience.

“We have someone like Grant Morgan who came back, Hayden Henry came back, and we have a lot of starters back,” he said. “I think that helps us with our whole team, because we’ve done it for a little while now. Especially those guys, having a full year to do it, that really helps our team’s mentality as far as a defense just being tough.

“They’re seeing the ones do it, and the younger guys are picking up on it. If your whole defense can be tough and physical and not fold in adverse moments, we’re going to be a really good defense.”