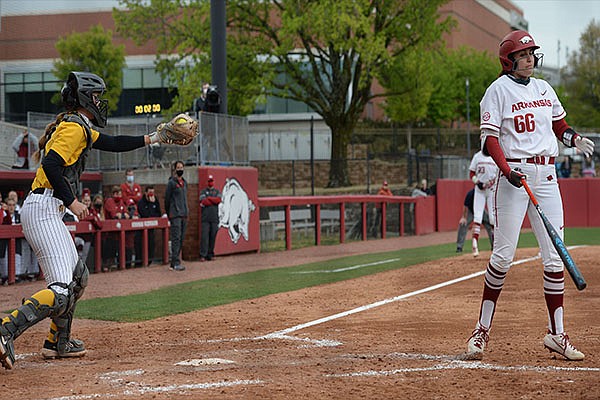 Arkansas right fielder Aly Manzo (66) and Missouri catcher Hatti Moore (left) react Saturday, April 24, 2021, after Manzo struck out with two on base to end the sixth inning of the Razorbacks' 6-4 loss at Bogle Park in Fayetteville.

FAYETTEVILLE — University of Arkansas softball Coach Courtney Deifel said the Razorbacks didn’t look like the same team Saturday afternoon that’s worked its way to the top of the SEC standings.

Missouri’s pitching duo of Jordan Weber and Emma Nichols combined on a two-hitter to knock off the No. 6 Razorbacks 6-3 on Saturday afternoon at Bogle Park.

Arkansas (37-6, 16-3 SEC) jumped in front thanks to Danielle Gibson’s 14th home run of the season, a three-run shot in the bottom of the first inning, but the Razorbacks could do nothing more against the Tigers.

“I don’t know that there was a lot of pressure, but I don’t feel like we controlled our emotions the way we should,” Deifel said. “I don’t really feel like we consistently fought today. I just haven’t seen this team before.”

“They’ll respond. They always have.”

No. 19 Missouri (33-10, 11-5) wiped out the deficit with three runs in the third. Jenna Laird’s RBI single up the middle got the Tigers on the board, and cleanup hitter Casidy Chaumont’s two-out, two-strike double into the left-center field gap tied it.

Missouri came up with a big momentum play when it threw out Braxton Burnside trying to score from first on Gibson’s double to end the bottom of the third.

“It was a mistake,” she said. “I feel like we all kind of went ‘Oh crap’ in that moment, and we just never really regained our composure.

“It happens, mistakes happen. I feel like we’ve recovered well when we’ve made mistakes of all kinds, but today I just really feel like we didn’t unfortunately. Credit Missouri, they had a really great game.”

Burnside, who entered the weekend tied for tops in the country with 23 home runs, was held to 0 of 2, but she walked in each of her first two at-bats on a combined nine pitches. The senior also struck out swinging on a 3-2 pitch to end the fifth, and lined out to third to end the game.

Kendyll Bailey hit her first home run of the season, a solo shot off Arkansas starter Mary Haff (20-4), in the top of the fourth to give the Tigers a 4-3 lead. They tacked on single runs in the sixth and seventh innings.

Missouri banged out 11 hits led by Chaumont’s 3-for-4 effort with a double, triple and 2 RBI. Three other Tigers had two hits each.

That was plenty for Weber and Nichols. Weber (9-2) picked up the while allowing 3 runs on 2 hits over 4 2/3 innings. Nichols pitched 2 1/3 scoreless innings for her seventh save. She did not allow a hit, but she walked three and struck out two.

Arkansas scored three times in the bottom of the first after back-to-back walks to Burnside and Hannah McEwen. Gibson then hammered a 1-0 pitch from Weber over the right-field wall for a 3-0 advantage.

Gibson accounted for both Arkansas hits and drove in all three runs. The junior said it was a lack of execution on the part of the Razorbacks that cost them the game.

“I just think that Mizzou, they controlled the pace of the game today,” Gibson said. “It’s a little frustrating to feel that pressure, us pressing. I just think we didn’t make adjustments when we needed to. We had plenty of opportunities.”

The series continues this afternoon with a 3 p.m. first pitch. The Razorbacks will honor nine players as a part of senior day pregame festivities. Today’s game will be broadcast on the SEC Network.