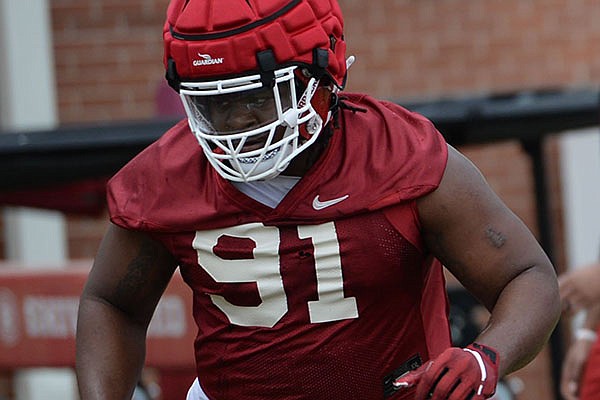 FAYETTEVILLE — Taurean Carter was not accustomed to being a designated scout team player.

Then a 6-3, 288-pound defensive tackle from Mansfield (Texas) Legacy, Carter was rated the 30th-best prospect at his position out of high school, and he was a four-year letterman. A menace to opposing offensive linemen, he racked up more than 90 tackles, 22 tackles for loss, and 11 sacks in his final two years at the school.

He was the man for the Broncos. Ultimately, he signed with Chad Morris and Arkansas over offers from the likes of Florida, Michigan State, TCU and Texas, among other programs.

In 2019, his first year with the Razorbacks, Carter was the low man on the totem pole.

It was a brand new concept for a high-caliber player one recruiting analyst upon his commitment to Arkansas said had enough ability, speed, burst and athleticism to reach the next level. His bio on the Razorbacks’ official website reads “Did not play during the 2019 season.”

Carter began playing football at age 4. His freshman season at Arkansas was the first time he had not touched the field in any game. Carter contemplated transferring, and he began questioning whether or not football was truly in the cards for him.

At certain points in time, he wanted to quit altogether. Carter regularly talked about his situation with his father, who encouraged him to do some self-reflecting.

“He’d give me the real, like, you’ve got to get better,” Carter said. “He said, ‘You’ve worked too hard your whole life, so don’t give up now. You’ll never want to be a quitter.’ He didn’t raise me to be a quitter. That made me have to look at myself in the mirror and ask myself what’s wrong.

“What am I doing wrong? How can I improve? I took that year doing scout team, putting in work after practice … I didn’t travel to games, so I would go into the facility on weekends then get back to it throughout the week. All those days added up and it helped me improve. I saw improvement and I saw me getting better at stuff I did before.”

Carter learned a lot during that time, both about himself and what coaches wanted from him.

Looking back now, after sticking it out through what he considers the biggest challenge he has faced in his life, he wouldn’t trade that experience, which included what amounted to a restart because of a coaching change.

“It’s definitely a grind, it’s definitely a lesson,” he said. “To future athletes in the world, they need to embrace that process because it can teach you a lot of things. I feel like in order to get to the next level — the pro level — you need this. You need that process.

“It’s been kind of frustrating, but you just keep trusting in God and his process and the path he paves for you. I just keep working every day and try to make the best of the situation.”

In 2020, under first-year coach Sam Pittman and against an SEC-only schedule, Carter finally felt like himself again and a sense of belonging overcame him. His numbers — 11 tackles — don’t jump off the stat sheet, but confidence-building moments were plenty.

Carter finished with two tackles against Georgia in the season opener, three in Arkansas’ home win over Tennessee in which the defense shined after halftime, and three against LSU in his first career start. In facing the Tigers, he said he understood he is not far from where he needs to be in terms of growing into a difference maker up front.

It was a game, too, that he needed. And he used it as a springboard entering the first spring under Pittman. Once a defensive tackle who sat between 280-290 pounds and 28% body fat, Carter is more comfortable with his physique. He was a “solid” 298 pounds late in spring drills, he said.

By the end of the team’s work, Pittman was high on Carter’s play and leadership.

“That’s why you’re getting better, you’re straining more,” Pittman said during practice on April 15. “I like where you are (at the front of) the line, too. That’s where you belong.”

Center Ricky Stromberg, who Carter faced often and exchanged words with through competition, said the lineman’s work with his hands gives him an advantage.

“He is able to grab my hands sometime,” Stromberg, who has 19 starts in two seasons, said. “Sometimes I shoot my hands and he grabs them. Not a lot of D-lineman I have played have been able to do that. He uses his hands really well as a D-lineman.

“That is a big thing for a defensive linemen.”

Carter, in an attempt to further his on-field play, has taken key pass-rush techniques from Los Angeles Rams star Aaron Donald that he is eager to put to use for the Razorbacks, which struggled in 2020 to generate pressure and make opposing quarterbacks uncomfortable.

Since Arkansas’ spring game on April 17, Pittman and his coaching staff have added three defensvie linemen. Two are former Missouri players — tackle Markell Utsey and end Tre Williams — who played under defensive coordinator Barry Odom with the Tigers. The Razorbacks also gained the pledge of John Ridgeway, an edgy and physical tackle from Illinois State.

Carter believes if the trio buys in and meshes well with returning players and defensive line coach Jermial Ashley that the front can be productive, aiding Arkansas in making a Year 2 leap.

“I think they’ll be a pretty good fit. We need help. We need help,” Carter said, humbly. “We need all the help we can get. I just take it as, shoot, we need help. I know my worth and I know where I stand, and I know I can play in this conference. We stick together, I feel like we’ll be a solid defensive line.”

Zach Williams, a rising junior, is a breakout candidate at defensive end this fall. Listed at 246 pounds last season, he worked out at 264 in the spring and hopes to add 10 more pounds prior to Game 1. Williams is carrying the added weight well, he said.

Jashaud Stewart, who drew praise from Pittman throughout the spring for his relentless effort and motor, and Eric Thomas are two other linemen who excite both Pittman and Carter.

“Each of us, we have the will and power to make plays, and I feel like that’s what we need on the defensive line to make a difference here,” said Carter, who is used to leading as the oldest of five siblings. “We’ve got to start making plays up front.

“I put trust in each and every single one of those guys. I can go to bat with them.”