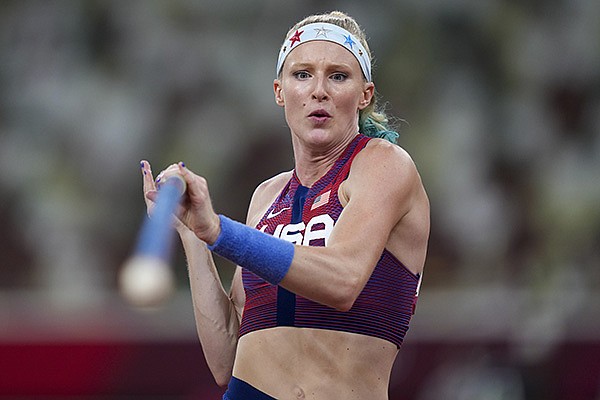 Sandi Morris, of the United States, competes in qualifications for the women's pole vault at the Summer Olympics, Monday, Aug. 2, 2021, in Tokyo.(AP Photo/Matthias Schrader)

Sandi Morris, the former University of Arkansas NCAA pole vault champion and 2016 Olympic silver medalist, failed to advance to the Olympic final in Tokyo after injuring her left hip during Monday’s qualifying round in the event.

Tina Suteja, also a former Arkansas NCAA champion competing for Slovenia, cleared 14 feet, 11 inches and was among 15 vaulters advancing to the final.

Morris cleared her opening height of 14-51/2, then because of rain, she requested a delay. Officials delayed the pole vault and shot put for about an hour.

When competition resumed, Morris was injured on her first try at 14-11 when her pole broke after she planted it. She wasn’t able to get to the bar and came down on the edge of the padded pit area.

It didn’t count as an attempt because of her broken pole, but a microphone on the field picked up Morris saying she had overstretched her hip but thought she would be OK.

On Morris’ next try, she again came up short of the bar after planting her pole and came down carefully on the padding.

Morris’ second official attempt ended with her slowing down on the runway, letting go of the pole and landing on the padded area in obvious pain.

Medical personnel attended to Morris, who was crying and had to pass on a final attempt and drop out of the competition.

“I just want everyone to know I’m safely back in the Olympic village and have been seen by our awesome Team USATF medical staff,” Morris posted later on her Twitter account. “When I broke the pole, it hyper-extended my hip flexor. I felt it immediately when I stood up after the break, and I knew for certain something was very wrong when I tried to run down the runway for another attempt.

“My hip flexor was shooting pain down my leg and clicking, and my quad was cramping as a reaction. I had no chance to make it down the runway for another jump. But I tried anyway.”

Morris, 29, lives and continues to train in Fayetteville. She won the 2018 World Indoor Championship and is a six-time U.S. champion indoors and outdoors.

“I can walk away from today knowing I gave it all I had,” Morris said in her Twitter post. “The conditions and circumstances were unlucky and unfortunate, but I will go home, heal, be around the love of my husband [Tyrone Smith] and family, and I know I’ll come back just fine.

“I just need to heal now. Thank you for all of your support. You truly have no idea how much it means to me. I wish I could hug every last one of you.”