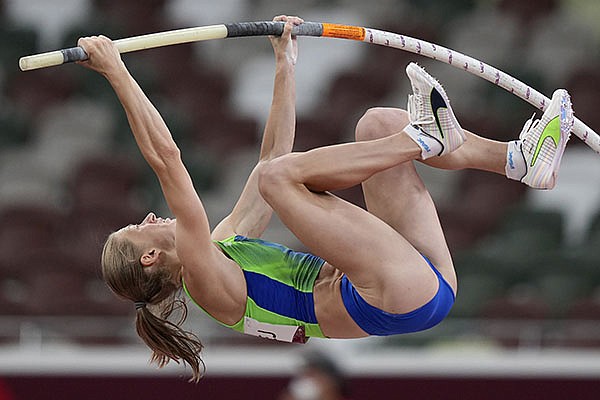 Tina Sutej, of Slovenia, competes in the final of the women's pole vault at the Summer Olympics, Thursday, Aug. 5, 2021, in Tokyo. (AP Photo/Matthias Schrader)

Tina Sutej, a former University of Arkansas NCAA pole vault champion competing in her third Olympics for Slovenia, finished in a tie for fifth in Thursday’s final with a clearance of 14 feet, 9 inches.

Sutej finished in a three-way tie for fifth with the Ukraine’s Maryna Kylypko and Finland’s Wilma Murto. All three missed at 15-5.

American Katie Nageotte went 16-0 ¾ to win the gold medal. Anzhelika Sidorova of the Russian Olympic Committee team cleared 15-11 for the silver medal and Great Britain’s Holly Bradshaw made the same height to take the bronze.

Dominique Scott, a four-time NCAA champion for the Razorbacks, will compete in the 10,000 meters on Saturday. Last week she finished 13th in the preliminaries of the 5,000.