Matthews eliminated in amateur round of 16 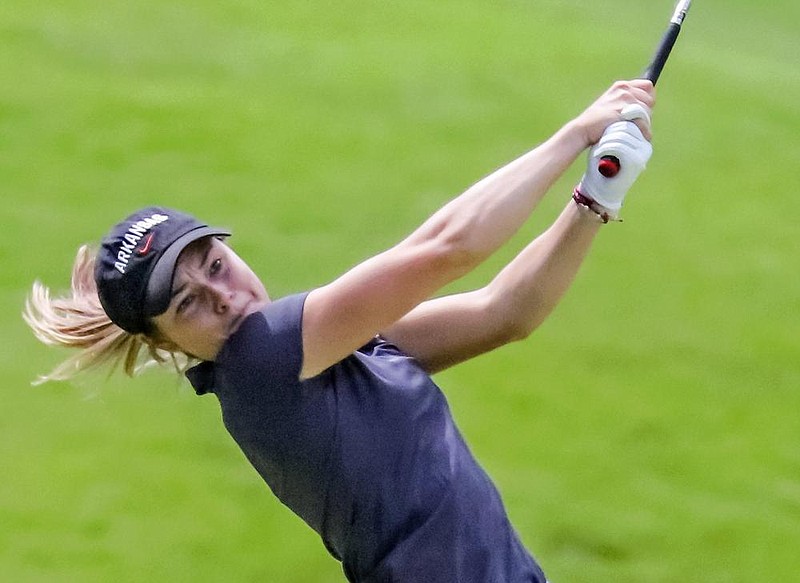 University of Arkansas junior Brooke Matthews bogeyed the first playoff hole and lost to NCAA champion Rachel Heck in the last match on the course in the round of 16 at the U.S. Women’s Amateur championship on Thursday.

Matthews held a 2-up lead after a birdie on the 15th and a par on the 16th at Westchester Country Club in Rye, N.Y., but Heck, a freshman at Stanford who won the NCAA individual title this spring, roared back to win three holes in a row and capture the match.

“In match play it’s never over until it’s over,” Heck told the Peacock Network. “I was there with my dad walking down the fairway on 17 and I knew I was two down but we were smiling, talking about what we were going to do for dinner. We were just happy and having a good time and staying in it.”

The duo returned to the par-3 1st, which Matthews had won hours earlier to open the match, and Heck reversed the outcome.

Peacock Network analyst Morgan Pressel called the Matthews-Heck pairing the match of the day. Neither player ever led by more than two holes.

Heck birdied Nos. 10 and 14 to re-gain a tie before Matthews pulled away briefly.

Matthews won her morning match and advanced one round farther than she did at last year’s championship in Rockville, Md.

Matthews survived a nail biter against Penn sophomore Elle Nachmann in the morning, while Heck was routing Grace Kim of Australia 7 and 6.

The two were tied after 10 of the 18 holes, including a tense stretch of six in a row from Nos. 12 through 17 after Nachmann’s par on the 11th tied the match.

Nachmann broke to the lead by winning No. 1 with a par, but Matthews responded with a birdie on No. 2 to regain a tie. Matthews birdied the par-5 5th and the par 3-6th to win both holes and take a 2-up lead.

Nachmann fought back to win three of the next five holes and regain equal footing to head down the stretch. Nachmann got within one after Matthews birded the 7th, but Matthews eagled the par-4 8th, the toughest hole on the course, to restore a 2-up lead. Matthews’ eagle on No. 8 was the first yielded by the 436-yard par 4, which had played to a 4.583 stroke average through the first three rounds.

Heck, who won the ANNIKA award as the top collegian, advanced to face Kan Bunnabodee of Thailand, the highest-seeded player remaining at No. 11, in today’s quarterfinals.