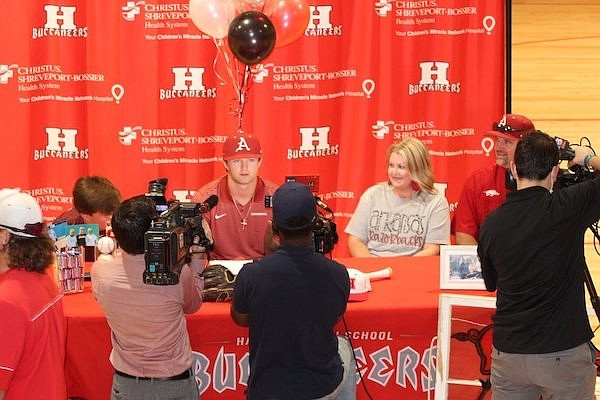 While Friday marks the first Arkansas preseason summer football practice of the 2021 season, it will also be a big day for the Razorback baseball program.

His presence in an Arkansas uniform in 2021 was not a given as several mock drafts had him as a first or second-round selection in the July Major League Baseball Draft.

He was ranked as the 33rd-best prospect by Baseball America.

But when he wasn’t taken in the first round, Stovall’s mind crystalized that he wanted to play college baseball in Fayetteville and told teams there was no reason to waste a draft pick.

“I said this many times since I decided to withdraw my name that as far as facilities, I know that I am going to be able to develop the best at Arkansas because of what I have seen they have done in the past,” Stovall said. “Not only as a baseball player, but their success rate in players getting degrees and their baseball paths is truly special.”

Stovall told MLB clubs what it would take in terms of a signing bonus to give up going to Arkansas and admits it was a massive amount.

“It was one of those things where I set my number high and me and my family have always said that it was going to take a lot to get me to not go to Arkansas because we feel that strong about the university and its baseball program, the staff and the fans and the atmosphere,” Stovall said.

“We did take some calls and I got some messages so I kind of knew where I stood, but going into the draft I also kind of knew, without knowing per se, it was going to have to be somebody outside the box to take me in the first round with the money I wanted.”

After getting out of bed on the second day of the draft, Stovall was certain of his future.

Stovall is part of a 2022 Arkansas recruiting class that was ranked third nationally by Baseball America going into the draft.

“Me and Hagen are really tight and we told each other that if I go to Arkansas that you are going and vice versa. We are happy we both are going to be on campus. Same thing with Drake. I have such a connection with him and same thing with Austin and everybody that is going to be up there together. We are all excited and ready to get to work.”

Stovall is excited about working with Arkansas head strength and conditioning coach Blaine Kinsley, who had the same title for the St. Louis Cardinals’ minor league affiliates in Springfield, Mo., and Jupiter, Fla.

“I just talked to their strength coach (Monday) and he was really awesome to talk to,” Stovall said. “The culture up there is just different, including the older guys taking in the younger guys under their wings and showing them how to work and be the best baseball player you can be.

“To be able to experience that will be just a dream come true.”

Stovall is not sure where he will play in the field next season with shortstop Jalen Battles, second baseman Robert Moore and infielder-outfielder Cayden Wallace among those returning.

“They really haven’t said anything about that, but I know it will be about how hard I work and how much I put into it is going to be how much I get out of it,” Stovall said. “I have to work extremely hard to earn anything up there and that’s what I am going to do.

“I am looking forward to learning under Cayden, Jalen and Robert. I am just going to try to soak everything up.”