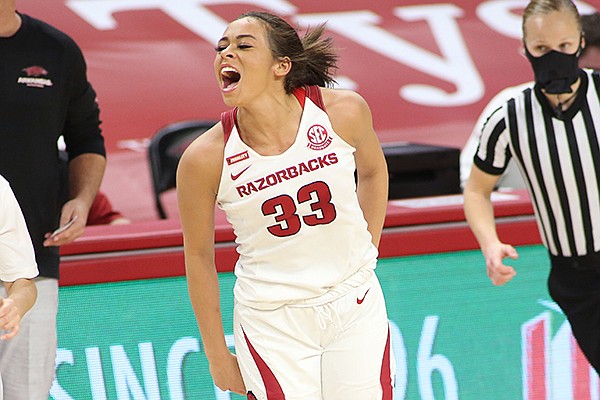 FAYETTEVILLE — Chelsea Dungee and Destiny Slocum played huge roles in helping the University of Arkansas women’s basketball team put together one of its best seasons in recent history last season.

Both agreed they are still learning some hard lessons in their rookie year in the WNBA.

Dungee earned All-American honors in her final season as a Razorback, while both were All-SEC selections. Dungee was the fifth overall pick by the Dallas Wings, while Slocum was taken 14th by the Las Vegas Aces in the 2021 draft.

Chelsea Dungee At a Glance

NOTEWORTHY Played in 10 games thus far for Dallas, averaging just under 4 minutes per game. … Drafted by Dallas in the first round (No. 5 overall) of the 2021 WNBA Draft. … Earning $67,208 this season for the Wings. … Finished as one of the top Razorbacks in school history after transferring from Oklahoma following her freshman year. … Named first-team All American by Women’s Basketball Coaches’ Association and third-team by the Associated Press and first-team All-Southeastern Conference. … Averaged 22.3 points, 3.9 rebounds, 1.5 assists, 1.5 steals, 32.3 minutes per game and that 22.3 points per game ranks second all-time in Razorbacks history. … Set the school record with free throws made with 552. … Scored 30 or more points in a game 12 times, which is a program record.

Destiny Slocum At a Glance

NOTEWORTHY Has played in 15 games, averaging almost seven minutes per game. … Scored a season-best 6 points with 4 assists in 15 minutes against the Los Angeles Sparks. … Earning $61,543 this season for the Aces. … Drafted by Las Vegas in the second round (No. 14 overall) of the 2021 WNBA Draft. … Named to the All-SEC second team in her lone season at Arkansas as a graduate transfer. … Averaged 15 points, 3.9 assists and 3.3 rebounds per game. … Scored 22 points and dished out 10 assists against Missouri to become the first Razorback to register 20 and 10 since Kimberly Wilson in 1996. … Finished her collegiate career, across three schools, with 1,800 points, 611 assists and 384 rebounds. … Was twice named All-Pac 12 while at Oregon State and was named National Freshman of the Year by the Women’s Basketball Coaches’ Association while at Maryland.

But neither have been able to break through to play significant minutes as yet as a pro. Dungee’s played in just 10 of the Wings’ 21 games and averaged less than four minutes per game. Slocum has appeared in 15 games, averaging less than seven minutes a contest.

They said the transition hasn’t been easy. Neither player spent much time on the bench at any other level of basketball they played. But Dungee said she’s learning to deal with it and stay positive.

“At first, I didn’t feel like I could help the team,” Dungee said. “When I first came here, a few games would go by and you don’t get in a game. You’re like, ‘Oh, man.’ I’m used to playing 40 minutes. I drive home sometimes and think, ‘What can I do to get better?’ or ‘How can I help this team?’ It’s starting to change now though.”

“Mentally, it’s been an adjustment for sure. Really there’s not a role for me right now. It’s just when my name is called.”

She pointed to her teammates at Arkansas, who were always uplifting on the bench. That’s what she’s trying to do now for her Wings’ teammates.

“I remember the energy they gave me when I was at Arkansas,” Dungee said. “I’m thinking, ‘Let me give them give them energy.’ That’s kinda where I am now. Let me keep them going the way other people did me.”

That’s something she and Slocum have in common. And they are learning ways to help their team whether it’s being focused in practice or on the bench.

Slocum has always been a student of the game, according to Arkansas women’s basketball Coach Mike Neighbors. But she’s tried to take that up a couple of notches being on the bench in the WNBA.

“I don’t want to be the player coming to the bench saying, ‘What do we need to do, coach?’” Slocum said. “I want to already be thinking.”

Slocum, whose Aces’ team has a 15-6 record and is just a game behind Western Conference-leader Seattle, said it still hasn’t sunk in yet that she’s playing professional basketball. Well, maybe when she sees her paycheck.

Neighbors beamed with pride as he watched the Wings and Aces square off in Dallas on July 11, the final day before the Olympic break. Kelsey Plum, who played for Neighbors at Washington and served as a graduate assistant last year for him at Arkansas last season, was also on the court for Las Vegas. She recently helped Team USA to a gold medal in the inaugural 3-on-3 women’s basketball competition in the Olympics.

“The only way I can describe it is a proud papa, the feeling of seeing them out there,” Neighbors said. “I’m just in super fan mode. I’m wasn’t coach. They caught me on TV and somebody sent me a screen shot with a big cheesy grin. Just super proud of them.

“Afterward, Chelsea immediately sprinted off the court and came right to us and hugged us. Slocum had [Aces coach Bill] Laimbeer yelling at her, so she ran off pretty quickly. I didn’t want to get in a fight with Bill Laimbeer.”

Neighbors explained to them that the WNBA experience can’t be compared to college or the NBA on the men’s side.

“Look across there at Plum,” Neighbors said. “She’s in year four and they aren’t running set plays for her. I told them ‘Y’all probably don’t see it but they’ve both improved so much since the last time we played because of who you’ve been playing around every day.

Dungee has managed to grab some attention off the court as well. She has a role in the basketball-themed movie “She Ball”, which includes Chris Brown, Nick Cannon and Rebecca De Mornay is scheduled to premiere in some theaters and on Redbox today.

She was contacted by the film’s director through Instagram, who thought she would be a great fit for a specific character in the movie.

“I’ve always wanted to do acting,” Dungee said. “They talked to me on the phone and said they wanted me in the movie and I was just ecstatic about it. That’s my first opportunity and once you get that first one out of the way, they start coming coming more often.”

Dungee spent three days Los Angeles shooting the film and got to rub elbows with some stars like Chris Brown.

“That was fun to get to meet that group of people,” Dungee said. “That’s something I definitely want to get into. So you might look up and see me in a few more. It was intense but I learned a lot. I got on the set at like 11 to do all the fitting, make-up and all that stuff.

“We didn’t end until like 3 or 4 o’clock in the morning. That was different, but it was so much fun, so much energy. Just to interact with those actors, it was almost a dream come true for sure. To see those people on TV when I was growing up. Watching Nick Cannon, to being in a movie with him, was amazing.”

The WNBA season restarts from the Olympic break on August 15 and runs until late September. But basketball won’t stop then for either one as both have already contracts to play for professional teams in Turkey.

Dungee acknowledged she’s looking forward to that opportunity, too. The league limits teams to just two American players per roster and they are paid more. She will be expected to carry a big scoring load and she knows it.

“In my mind, I’m going over there to do what I did at Arkansas,” Dungee said. “Over there, they’re putting the ball in your hands. I look forward to that. That’s who I am. I got to go get a bucket.”

Dungee, whose Wings are 9-12 and seven games behind West-leading Seattle, credited calls from Neighbors and Arkansas associate head coach Todd Schaefer for helping keep her in a positive frame of mind.

“I have love for them and always will,” Dungee said. “They talk to me from a parent’s perspective almost. They talk me through things and always keep me good for sure.”

Both players are looking to take what they’ve learned and put it into practice on the floor in the future.