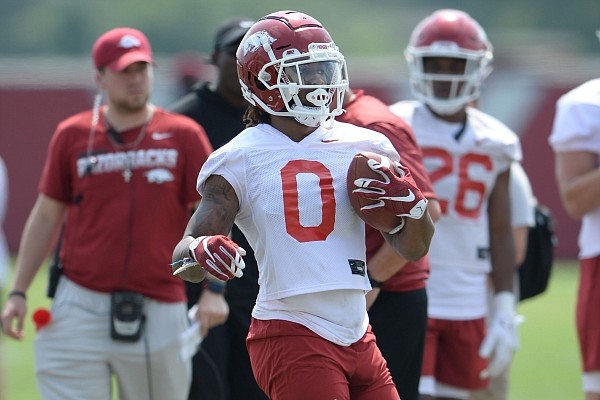 Arkansas running back AJ Green carries the ball Saturday, Aug. 7, 2021, during practice at the university practice facility in Fayetteville.

FAYETTEVILLE — One of the highest-rated players in Arkansas’ 2021 recruiting class is adjusting to college football like many hoped he would.

A former 4-star recruit from powerhouse Tulsa Union, running back AJ Green has already made a strong impression on his coaches and teammates just four days into preseason practice.

For some newcomers, it can take time to shake off early nerves. Grasping concepts and truly showcasing ability isn’t always instantaneous, either.

But Green, by all accounts, doesn’t fall into that category.

“He's got a calmness about himself for being a freshman,” Arkansas running backs coach Jimmy Smith said Monday. “You'll find that he's just always calm. Nothing rattles him. For three days, I haven't seen him rattled by any situation.

“He just keeps playing and keeps it going. That's a big deal."

Green, 5-11, 200 pounds, is among a host of running backs pushing to become the Razorbacks’ No. 2 option behind Trelon Smith, a redshirt junior who made the most of his extended playing time following Rakeem Boyd’s opt out in 2020.

Green's ability to process new information could help him see the field sooner than later this fall.

Jimmy Smith added that he thinks Green can lend a hand on special teams.

“He’s played running back for a long time, so he understands it,” Jimmy Smith said. “It makes a little more sense to him when you give (information) to him.”

Green spent the portion of Day 1 open to the media toward the back of the line as running backs worked through drills. When asked about that, Arkansas coach Sam Pittman said it was Green’s way of giving a nod to older players.

It was not a reflection of where he stands in the group's pecking order.

“I don't anticipate him being the last running back we have,” Pittman said. “He did some nice things. I'm very excited about his knowledge. He's a smart kid and he learns fast.”

For Trelon Smith, what has jumped out most about Green is that he is picking up plays seamlessly. That, he admitted, was a surprise.

“He’s just worked and worked hard,” Trelon Smith said. “I actually like that about AJ Green, that he comes in and works. He knows what he’s here for and he knows what he wants to do.

“If he can play this year, that’s what he’s going to try to do. He has been busting his tail on and off the field every day.”

Asked for his thoughts on the freshmen in the backfield, Josh Oglesby, who also runs track for the Razorbacks, noted Green’s running style is similar to his own.

Green fits perfectly into a speedy and hard-nosed room. He ran a wind-aided time of 10.38 seconds in the 100-meter dash as a freshman in high school.

Green rushed for 1,325 yards and 19 touchdowns during his senior season, averaging 7.8 yards per carry.