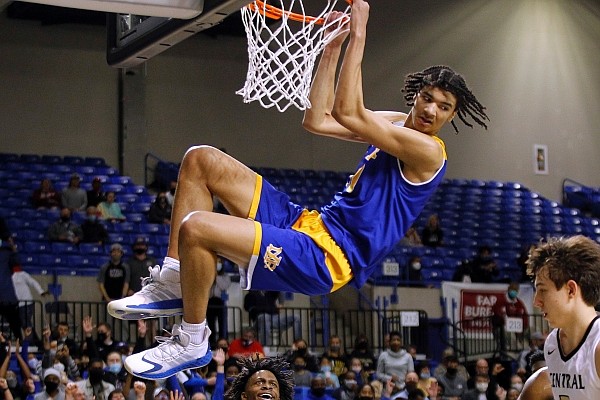 North Little Rock’s Kel’el Ware hangs on the rim after a dunk during the fourth quarter of the Charging Wildcats’ 65-55 victory over Little Rock Central in the Class 6A championship Thursday at Bank OZK Arena in Hot Springs.

“When I went down there I was surprised by the facility,” Ware said. “Like the coaching staff, they’ve been coaching with each other for over 10 years, so just being in the program where the coaches have been together for so long that will be great for me.

He averaged 16.4 points, 8.8 rebounds and 4.6 blocks per game as a junior and was named second team Arkansas Democrat-Gazette All-Arkansas Prep. Ware led his team to the Class 6A state title game after finishing with 19 points, 8 rebounds and 2 steals. He was named MVP of the game.

Looking to experience life outside of the state was enticing to Ware.

“It was my dream to actually leave Arkansas and be great somewhere else but still be able to represent Arkansas as well,” Ware said.

ESPN rates Ware a 4-star recruit, the No. 13 center and No. 75 overall recruit in the nation for the 2022 class. He officially visited Fayetteville on June 1-3 and visited Oregon on June 14-16.

“After the visit I thought about it a little bit and I was like, ‘Yeah, this is where I want to be,’” Ware said of Oregon.