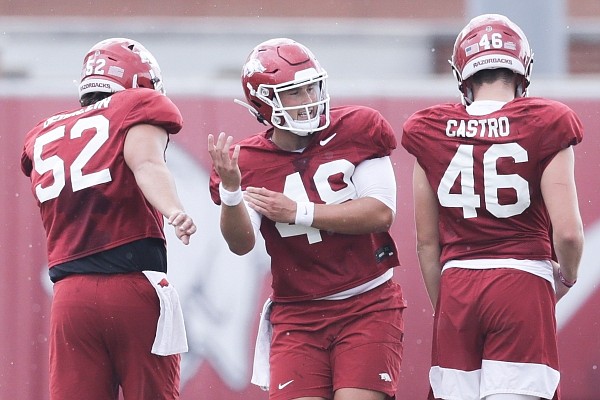 FAYETTEVILLE — Arkansas deep snapper Jordan Silver is one of the team’s top community service leaders, and he’s served on the SEC Leadership Council.

“Back in Branson, where I’m from, I wasn’t able to engage in the community as much as I am now,” Silver said. “Now, it’s an amazing platform here having the Razorbacks, because we can reach out to everybody in the state and help anybody with community service.”

“It’s an awesome opportunity, and I encourage other people on the team,” Silver said. “It’s a blessing to them, but it also helps you as well because you realize, ‘It’s not always about me.’”

Deep snapper Jordan Silver had his first media interview Monday, and it seemed like an enjoyable moment.

“This is so cool,” Silver said while taking a seat at the podium. Moments later, he added, smiling, “I’m open for questions.”

In the team period to open practice, called a “fastball start” by the coaches, Treylon Burks got some yardage on a sweep on snap No. 1. KJ Jefferson threw incomplete to Trey Knox, got some yards on a keeper, then threw complete to tailback Rocket Sanders after a “tag” by defensive end Tre Williams.

During Malik Hornsby’s four plays, he ran a keeper, Josh Oglesby ran up the middle, receiver Bryce Stephens could not hold onto a low pass, then Hornsby threw incomplete to Ketron Jackson.

Kade Renfro ran the third rack at quarterback. On those four plays, Javion Hunt had a run, Renfro threw complete to Warren Thompson, Renfro ran a keeper, then Renfro rolled out and hit Harper Cole with a deep ball after a “tag” by linebacker Chris Paul.

Treylon Burks had a strong day during individual coverage drills, twice getting past Joe Foucha for completed “go” routes. John David White also won twice, once for a touchdown against Foucha and also against Hudson Clark.

On the other side of the ball, cornerback Devin Bush won two reps: breaking up a pass intended for Warren Thompson, then forcing an incompletion vs. Tyson Morris.

Freshman wideout Ketron Jackson got past Myles Slusher on a crossing route, and Darin Turner won a 50-50 pass against Nick Turner with a catch.

Corner Khari Johnson forced an incomplete pass while matching up against Jaedon Wilson.

Top running back Trelon Smith, offensive linemen Ricky Stromberg and Marcus Henderson, linebacker Deon Edwards and punter Sam Loy were not on the field during the media viewing portion of Monday’s workout. Running back AJ Green was at practice with the running backs group, but he did not dress out.

Smith and Henderson were the only players from that group who had not had previous injuries reported.

In Smith’s absence, Rocket Sanders ran first-team tailback, with Josh Oglesby in the second group and Javion Hunt with the threes.

Hudson Henry got first-team reps with the starters at tight ends, and the four-man group of first-unit wide receivers was Treylon Burks, Jaquayln Crawford, Trey Knox and De’Vion Warren.

It looks like Greg Brooks Jr. is emerging as the University of Arkansas’ top punt return choice, mostly based on Brooks’ initiative.

“Greg came in this summer and said two things I didn’t know about him,” Arkansas special teams coordinator Scott Fountain said. “He said, ‘My dad played in the NFL,’ which was kind of interesting. And he said, ‘Coach, I want to play on more special teams for you.’ A lot of kids are not always that way.”

Fountain said he asked Brooks, who plays in the secondary, how many plays per game he was averaging. Brooks said around 70.

“So, we started working this summer, and it’s been a good pickup for us. He’s a guy that can do that.”

Fountain said Brooks can field the ball, which is the most important element of returning punts.

“But I also feel like your best punt returners are guys that are a little bit dangerous back there,” Fountain said. “They field the ball well. They might not field it as well as the other guy, but they’re going to be a difference-maker when they touch the football. That’s what we’re trying to find in that position.”

Fountain said he’s shown the Adams’ highlight to the team.

“We want to get back to that,” Fountain said

The Razorbacks have been working during the heat of the afternoon for much of camp, other than a morning scrimmage Saturday.

The schedule will be adjusted a bit this week, with practices on Wednesday through Saturday commencing in the morning following afternoon workouts on Monday and today.

“The reason behind that is because I felt like we had slow starts at 11 [a.m.] last year,” Coach Sam Pittman said. “The band, the crowd, those things will help us, but starting fast is on you individually. But we also have to teach them this is how your body feels the next time in the morning.”

Pittman said the Razorbacks would work in “spider” pads on Wednesday and Friday and in full pads on Thursday and Saturday. The scrimmage on Saturday will be closed to the media and public and will be held at Reynolds Razorback Stadium.

Nathan Bax, a redshirt sophomore from Jefferson City, Mo., could emerge as the Razorbacks’ third tight end behind Hudson Henry and Blake Kern.

“He’s got a very professional mindset about him,” tight ends coach Dowell Loggains said. “He knows what to do, he knows the right spots, you can count on him. When we grade out, he’s very consistent. He’s the same player every day. I’d say he’s our most improved player in that room to this point in camp.

Henry said Bax “totally changed his body in the weight room” to gain strength and is sharp mentally.

“He’s focused on the details,” Henry said. “He pays attention in meetings. He’s getting extra stuff in after workouts, after practice. He’s done a great job, and he has improved in just every aspect of the game.”