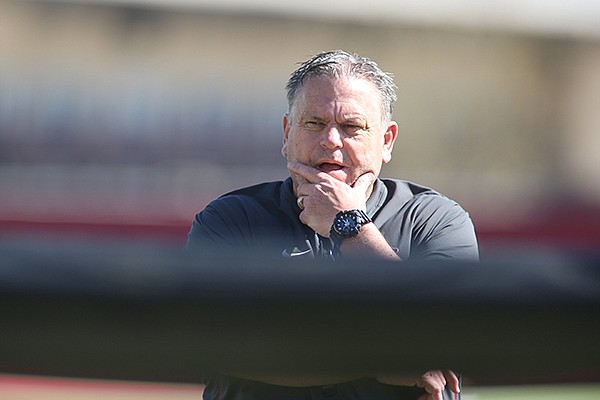 It wouldn’t have been shocking if the Arkansas Razorbacks didn’t win a game last year.

Sam Pittman and his staff took over a dumpster fire, but in a very short time they gained the confidence of the team and won three games.

Despite losing an experienced quarterback, the Razorbacks will show improvement. Barring injuries, they will be better in their last game than their first, and a 6-6 season is possible.

Here’s game-by-game predictions for the season:

Rice at Arkansas The Owls didn’t get a lot of preseason respect, but they return 19 starters and 89 lettermen. Expect this one to be close at the half, but the Arkansas defense dominates the second half for a 35-21 victory.

Texas at Arkansas This is not a Southwest Conference showdown or reunion. The Longhorns have their third head coach in seven years and will have a new quarterback. The Razorbacks will use four running backs, grinding out 261 yards with another 122 in the air to win 28-24.

Georgia Southern at Arkansas The most difficult thing about this game might be how Sam Pittman keeps his players from looking ahead. Arkansas has more than 500 yards of offense, wins 42-14 and has its first 3-0 start since 2016.

Texas A&M vs. Arkansas An early battle of undefeated teams in Arlington, the game is tied at 24-24 late in the third quarter when the Aggies fumble deep in Arkansas territory. The Hogs recover but go three-and-out. The Aggies drive 47 yards for the go-ahead touchdown and add another midway through the fourth quarter while holding the Razorbacks to a field goal. A&M wins 38-27.

Arkansas at Georgia The Bulldogs’ defense struggles against KJ Jefferson’s ability to run and throw deep, but their offense is balanced despite three quarterback sacks. Georgia pulls away in the fourth quarter for a 34-24 win.

Arkansas at Ole Miss Ole Miss starts slow, but with 3:38 to play and the Razorbacks leading 38-35, the Rebels drive 80 yards in six plays to score on a 17-yard touchdown run by Jerrion Ealy for a 42-38 win.

Auburn at Arkansas Both teams are looking to snap a losing streak. The Tigers fell hard to LSU and Georgia the two previous weeks. Both teams are also a little banged up. The Tigers play as if they have never heard of Treylon Burks, who has nine catches and three for touchdowns. The Razorbacks win 31-20.

UAPB vs. Arkansas A historic game between members of the UA System, and the Golden Lion fans make up almost a third of the 48,000 in attendance at War Memorial Stadium in Little Rock. The Razorbacks score three times in the first half and finish with 554 yards of offense and a 49-21 win.

Mississippi State at Arkansas The Razorbacks come in off an open date and remain undefeated in their home stadium. They take an early lead, and the defense records four sacks and three tackles for loss. Arkansas wins 42-17.

Arkansas at LSU The Tigers are returning home after another loss to Alabama and struggle early, but they have so much depth and experience that they play an almost perfect second half and win 35-27.

Arkansas at Alabama The undefeated Crimson Tide take nothing for granted, and their defense — which is allowing only 221 yards per game — pressures Jefferson from the start. Alabama wins 35-17.

Missouri at Arkansas The Razorbacks return the opening kickoff 91 yards for a touchdown and never trail. Jefferson hits Trey Knox on a 57-yard touchdown, and Arkansas finishes 7-5 after a 38-28 victory.