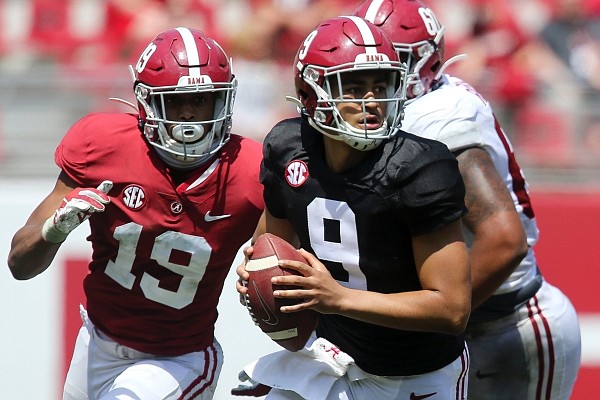 Alabama's primary challengers in the Southeastern Conference can't take too much heart from the Crimson Tide breaking in an inexperienced quarterback.

They're in a similar boat.

There is a new group of passers at the top of the league, but the same expectations exist. The SEC has won three of the last four national titles, including dominating runs of perfection from the top-ranked Crimson Tide last season and LSU in 2019.

Georgia coach Kirby Smart even quoted Henry David Thoreau, though it could easily have come from his Alabama's Nick Saban.

“Success comes to those who are too busy to be looking for it,” Smart said.

“I’m too busy trying to take the next step to give our team a competitive advantage to really worry about expectations."

In Tuscaloosa, Ala., that's referred to as The Process.

Preseason No. 13 Florida and No. 6 Texas A&M are also turning to new quarterbacks. No. 5 Georgia has the no-brainer decision of sticking with end-of-season starter JT Daniels and No. 16 LSU’s Max Johnson takes over for Myles Brennan, who is expected to miss much of the season after surgery on his left arm.

The SEC must replace 12 first-round NFL draft picks, half of them courtesy of the Tide.

Alabama lost three Heisman finalists from offense — including Harris. But a defense led by linebackers Will Anderson and Christian Harris — and ex-Tennessee starter Henry To'oTo'o — looks to be formidable

“We’re going to be a work in progress as we focus on improvement, and that’s going to be critical to our success,” Saban said. “We have a lot of difficult games early on the road, new coaches, new quarterback, eight new guys on offense.”

It will only get tougher in coming seasons when Big 12 powers Oklahoma and Texas join the SEC.

With covid-19 issues remaining and a region that lags in vaccination rates, the goal remains minimal disruption and, of course, the College Football Playoff for defending national champion Alabama and others.

There was good news and bad in camps. Auburn coach Bryan Harsin tested positive while Ole Miss had 100% of players and staff fully vaccinated. Other teams were close, including Alabama and Georgia.

Derek Stingley, Jr., CB, LSU: A first-team AP All-American in 2019, Stingley was limited to seven games last season on a defense that ranked at the bottom nationally against the pass.

Christian Harris and Will Anderson, LBs, Alabama: The fearsome duo are the stars of perhaps the nation's top group of linebackers, along with Christopher Allen and To'oTo'o. Anderson is a first-team preseason AP All-American and Harris is a second-team pick.

Kaiir Elam, CB, Florida: Was third in the SEC in passes defended per game, totaling 13.

Darian Kinnard, OL, Kentucky: The first-team All-SEC tackle is back for his senior season after starting 26 consecutive games.

Daniels and Young: Much is expected of these two prized recruits from southern California. Daniels delivered with a 4-0 record after taking over as starter last season. Young has far less experience but is Saban's most highly rated quarterback signee.

DeMarvin Leal, DE, Texas A&M: A preseason first-team AP All-American, Leal has 4.5 sacks and 12.5 tackles for loss over the past two seasons.

ON THE HOT SEAT

With eight new head coaches hired over the past two years, there may not be any real hot seats. Perhaps two or three warm ones that could heat up. Off-the-field issues have hit LSU and Ed Orgeron, who had a down year after leading the Tigers to a national title.

Mississippi State's Mike Leach had a rough first season despite winning the last two games and lost a number of players to the transfer portal.

Mark Stoops seems safe at Kentucky but is coming off a 5-6 season. Having six players arrested for first-degree burglary doesn't help. They pleaded not guilty on Aug. 20.