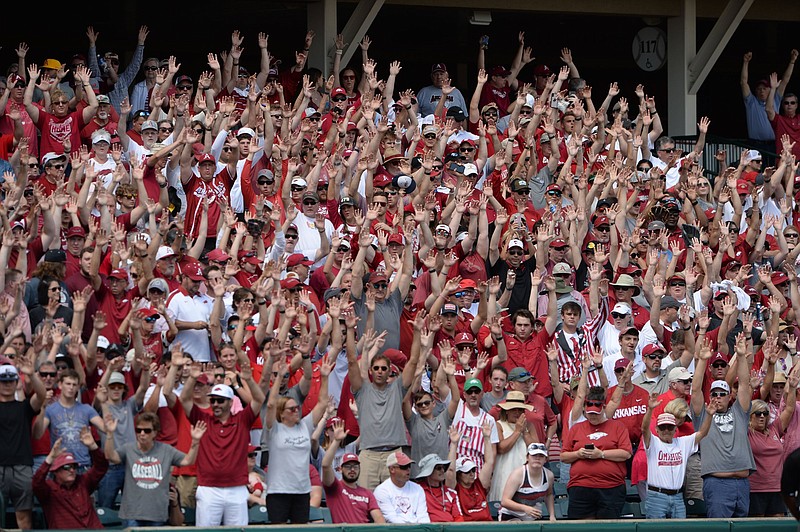 Fans at Baum-Walker Stadium call the Hogs during the fourth inning of Arkansas’ victory over NJIT on Friday in the first game of the NCAA Tournament’s Fayetteville Regional. Attendance for the game was listed at 11,084. (NWA Democrat-Gazette/Andy Shupe)

FAYETTEVILLE — Seating priority at Baum-Walker Stadium will be overhauled prior to the 2022 University of Arkansas baseball season, according to a letter sent to season-ticket holders Thursday.

Season-ticket holders will receive an email Friday addressing how the change will affect them individually. The ticket office has around 2,800 season-ticket accounts, according to Kevin Trainor, a UA spokesman.

“Current season ticket holders will have the opportunity to retain their seats by meeting the new Annual Fund donation level requirements for each section or will have the option to select/receive seats in another section consistent with their Razorback Foundation membership level,” the letter stated.

Donations to the Razorback Foundation do not count toward the cost of season tickets. The letter stated season-ticket prices will not increase for the next three seasons, except for suites, where ticket prices will increase in 2022.

There will also be caps placed on the number of season tickets that can be purchased. That will provide more people an opportunity to buy tickets, according to the letter.

“After 25 years without significant changes to the seating requirements in Baum-Walker Stadium, we recognize that some fans will be asked to increase their support, some at significant levels to maintain their current seating locations,” the letter said. “If that is not possible, the Seating Plan provides the opportunity for current season ticket holders to secure season tickets in other areas of the stadium.

“The success of Razorback Baseball has been made possible by the loyal support of our Razorback Foundation members and season ticket holders. As we continue to enhance our commitment to our student-athletes and to winning conference and national championships, we are asking you to, once again, join us in that effort.”

Baseball games have long been one of the best values for Arkansas fans, but ticket demand has swelled in recent years at the ballpark. The UA reported 6,710 season tickets sold in 2020, when the season was canceled after four weeks due to the covid-19 outbreak.

Full season-ticket packages were not offered this year due to limits on capacity for the first three months of the season. The Razorbacks allowed unlimited capacity for their final regular-season series against Florida when they clinched the SEC regular-season championship, and for NCAA regional and super regional games hosted at the ballpark.

The Razorbacks have regularly ranked among the top four in the NCAA in annual baseball attendance, along with SEC West rivals LSU, Mississippi State and Ole Miss, but ticket demand increased significantly after Arkansas finished runner-up at the 2018 College World Series.

In addition to tickets for all regular-season home games, season-ticket holders receive a priority window to purchase NCAA postseason tickets in Fayetteville. Arkansas has hosted a regional during the last four NCAA Tournaments, and has hosted a super regional four times since 2015.

Fourteen of the 18 most-attended games in the ballpark’s history have been for postseason games. Three of the other four games came during this year’s series against Florida.

“Since 2011, we have more than doubled our investment in Razorback baseball,” Yurachek said in a video that accompanied the letter. “The result: Coach Dave Van Horn has led our baseball program to the most successful decade in our history. I believe even bigger and better things are to come, and like me, Coach Van Horn and our baseball staff believe this plan will play a vital role in ensuring our future success.”

The Baum-Walker Stadium seating capacity increased to 11,129 this year after the addition of a small number of loge box seats above the right-field bullpen. That bullpen will become the home bullpen next season when the Razorbacks transition to the first-base dugout. It connects to the team’s right-field clubhouse inside the $27 million Hunt Family Development Center that was completed this summer.

As part of the team’s move to the first-base dugout, seating for the players' and coaches' families will be transferred to that side of the stadium as well. That will force some movement among season-ticket holders.

The change in seating comes ahead of what should be one of Arkansas’ most attractive home schedules in years. The Razorbacks will host Mississippi State, Ole Miss, LSU, Vanderbilt and Kentucky in 2022, based on the SEC’s scheduling rotation.

Mississippi State defeated Vanderbilt in the national championship series this year, and it has been three seasons since any of those teams played in Fayetteville.