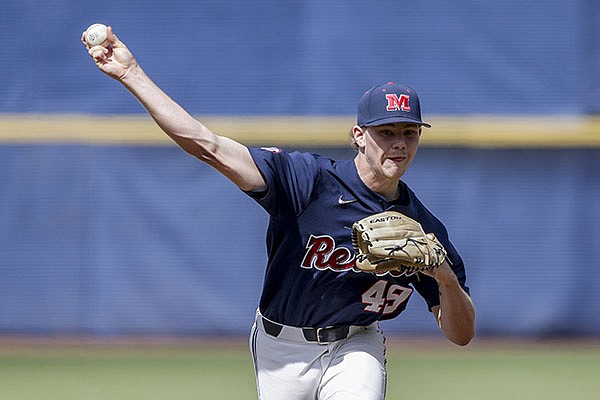 Ole Miss pitcher Cody Adcock pitches against Arkansas in the first inning of an NCAA college baseball game during the SEC Tournament on Saturday, May 29, 2021, in Hoover, Ala. (AP Photo/Butch Dill)

FAYETTEVILLE — Cody Adcock, a right-handed pitcher from Texarkana, will transfer to Arkansas for the 2023 season.

Adcock, a freshman at Ole Miss in 2021, will have two seasons of eligibility remaining. He will pitch the 2022 season at Crowder (Mo.) College.

He signed with Arkansas in the fall signing period, the Razorbacks announced Monday. The 19-man signing class is ranked fifth nationally by Perfect Game and seventh by Baseball America.

Adcock (6-3, 205 pounds) is one of two transfers in the class, along with infielder Harold Coll (6-0, 190) of San Jacinto (Texas) Junior College. Coll, a Boston native, attended Georgia Premier Academy in high school, and as a freshman at San Jacinto batted .342 with 3 home runs and 32 RBI.

Adcock pitched this summer for the Conejo Oaks of the California Collegiate League. He was a starter and was named the outstanding pitcher during the CCL Showcase Game on July 14, when he struck out two during a scoreless inning.

Adcock was a four-year letterman at Arkansas High School in Texarkana. He was 8-4 with a 1.57 ERA in 34 career high school appearances.