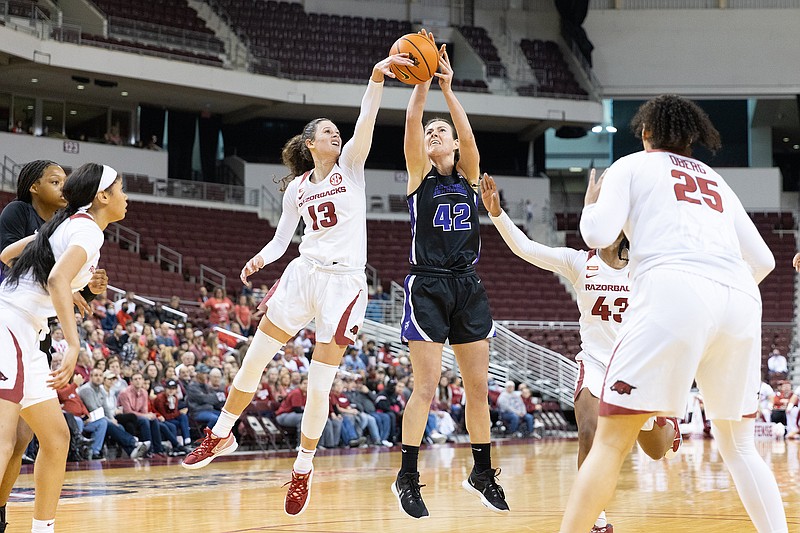 NORTH LITTLE ROCK -- It was an afternoon of clean basketball for the University of Arkansas women's basketball team at Simmons Bank Arena in North Little Rock on Saturday.

The Razorbacks coasted to an 82-44 win against the University of Central Arkansas women's team, hitting a high percentage of shots, and having five scorers in double figures, all while slowing the Sugar Bears to a near standstill in the third quarter.

"For us to play the way that we did, I think, from the middle of the first quarter all the way on, (I'm) really, really excited, happy," Arkansas coach Mike Neighbors said. "I thought everybody contributed."

Arkansas (10-2) finished shooting 50% from the field and 42.3% from 3-point range, a mark that's 8.9% better than its season average. Fayetteville native Sasha Goforth led all scorers with 17 points, two points shy of a season-high. It was the fourth time this year Goforth has scored 15-plus points.

"I love playing with Sasha," teammate and Fort Smith product Jersey Wolfenbarger said. "I think the high school rivalry we had set going into this kind of made us hesitant at first, but then, being on the same team, we realized we're both very very similar people."

Wolfenbarger wasn't far off from her high school rival's point total, scoring 16. Samara Spencer, Makayla Daniels and Destinee Oberg were the Razorbacks' other double-figure scorers, with 15, 11 and 10 respective points.

Spencer had six assistants, and Daniels tallied six steals and six rebounds. Rylee Langerman, who was starting in place of the injured Amber Ramirez, finished with three points, but she had a team-high eight rebounds.

Eight of the nine players that saw the floor for Arkansas generated points.

"I think that's the team we're going to be, is balanced," Neighbors said. "I think we're at our best when you look down and you see a bunch of people near double fingers, and that makes you hard to scout, makes you hard to prepare for."

While Arkansas had a bevy of scorers, its defense while also a high point, peaking in the third quarter. Coming out of the half, the Razorbacks held the Sugar Bears to 7.7% shooting in the third frame. UCA also didn't make any of its three 3-point attempts in the second half.

"Our defensive points per possession, because of those efficiencies, that's why our (NET Ranking) is so good right now, because that's a component," Neighbors, whose team is No. 22 in the NET, said. "Our defensive efficiency is just as important as our offense, but when they both click, that's why we're, I think, a little higher in the NET than most people thought we would be at this point in time."

Central Arkansas (4-6) shot 29.8% for the game, its second lowest mark this season. Lucy Ibeh led the Sugar Bears with 17 points. She also had a team-high nine rebounds. Hanna Langhi was UCA's only other scorer with 5-plus points, scoring 8.

The win also completed a sweep of all four in-state Division I women's basketball programs for Arkansas.

The Razorbacks traveled to Jonesboro to play Arkansas State, and hosted Arkansas-Little Rock and Arkansas-Pine Bluff in this year's non-conference slate, beating all three ahead of Saturday's win against UCA.

While the Razorbacks traveled to just one in-state program this season, Neighbors said that, in the years to come, Arkansas will plan to travel and play at other in-state institutions.

"This state is very often underlooked, underrated when it comes to high school basketball, and grassroots programs that we have during the summers," Neighbors said. "I want to make sure that we do everything we can for all of our programs."