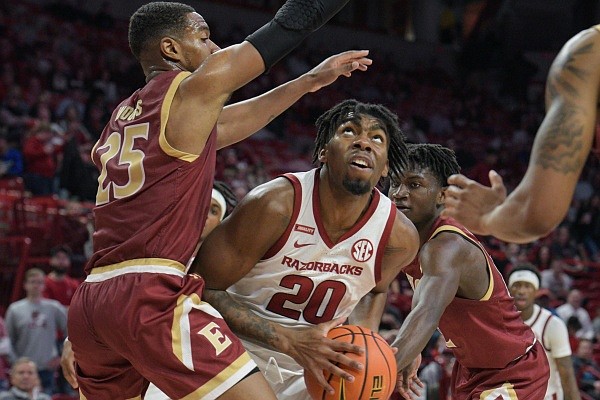 Kamani Johnson of Arkansas prepares to shoot on Tuesday, Dec. 21, 2021, against Hunter Woods of Elon during the second half of the Razorbacks’ 81-55 win at Bud Walton Arena in Fayetteville.

FAYETTEVILLE — The 11th Arkansas player to enter Tuesday’s home game against Elon had perhaps the greatest impact on the Razorbacks putting an end to their two-game losing streak.

Kamani Johnson, a 6-7 forward transfer from Arkansas-Little Rock, came into the night having played only 7.3% of the team’s available minutes this season, according to KenPom data. But when his number was finally called, he changed the complexion of the game and sparked Arkansas’ 81-55 victory with an array of contributions on both ends of the floor.

He finished with season highs in points (15) and rebounds (7), and a career-high 3 blocks in 17 minutes.

Johnson’s final line was a byproduct, Razorbacks coach Eric Musselman said, of his best and most focused practices over the last week.

“We have a phone box where we put our phones in a box at the 60-minute mark (before games),” Musselman said. “Kamani’s phone was in there an hour and 30 minutes before. The scouting report, when we quizzed the guys at shootaround, he was on top of it. That’s what you want in a player.

“The one thing we know about Kamani is he’s tough and he’s not going to back down from anybody. I think that’s something this team needed, and he provided it.”

Musselman opted to give Johnson his first playing time since Dec. 7 against North Carolina-Charlotte at a critical juncture on Tuesday. He checked in with the Razorbacks trailing the Phoenix 26-23 with 5:15 remaining in the first half.

Johnson’s fingerprints were immediately all over the game. By halftime he had 2 points, 2 rebounds and 3 blocks, and Arkansas led by 12.

On his second offensive touch on the left block, Johnson quickly faced up, ripped through, drove baseline and added a reverse layup. Moments later, he contested an Elon shot near the rim and forced a miss that eventually led to a Jaxson Robinson right-wing three-pointer.

Robinson’s bucket put the Razorbacks ahead 28-26. They never trailed again.

“It’s always frustrating when you don’t get to play a lot, but I think the coaching staff and my family have been doing a good job of just telling me to keep on working and just keeping trust in myself and trust in my game,” Johnson said. “When you are not playing you can start doubting yourself, but my inner circle and the coaches just keep telling me to work and work.”

Johnson, even in his limited run this season, had shown a propensity to make an impact on the glass. In 9 minutes against Gardner-Webb, he grabbed 6 boards, and in 4 minutes against Cincinnati, he finished with 2, both offensive.

His lone offensive rebound in the game led to a JD Notae floater that put Arkansas up 43-30. He also made multiple effort plays that will not show up in a box score.

In one instance following a missed three-pointer by Chris Lykes late in the shot clock, he battled for an offensive rebound. Though he did not come down with it, the Razorbacks kept possession and Notae later added two free throws.

“I thought he did a great job for us on the glass, drawing fouls and gave us a physicality,” Musselman said. “And he had a few rebounds that he got out of his area that maybe some other guys have not (grabbed) of late.

“I thought his rebounding out of his area was really important.”

Johnson drew 6 fouls on Elon defenders — second most on the team to Lykes’ 7 — and made 9 of 13 free throws. It was the eighth time in his college career he attempted 10 or more free throws in a game.

His 13 free throws are the most by an Arkansas player this season.

“We have to dominate,” Johnson said. “That’s what we showed. We’re dogs, so we have to be dogs on the court.”