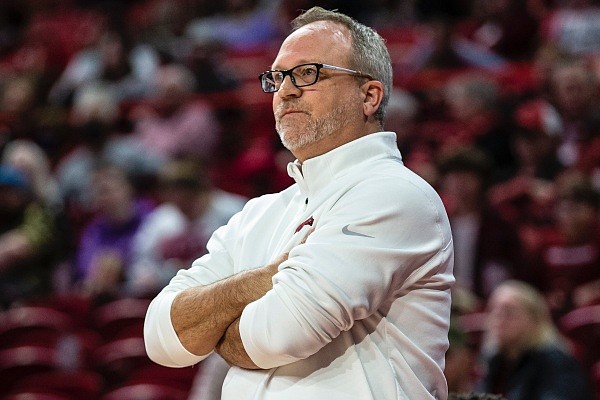 Mike Neighbors, Arkansas head women's basketball coach on Sunday, December 12, 2021, during the 2nd half of play against Arkansas-Little Rock at Bud Walton Arena in Fayetteville.

FAYETTEVILLE — Barring any surprises, the University of Arkansas women’s basketball team will close the nonconference part of its schedule with just 10 available players against Creighton this afternoon at Bud Walton Arena.

The Razorbacks (9-2) are coming off what Mike Neighbors called their best half of basketball thus far to finish off an 82-44 victory over the Central Arkansas on Saturday in North Little Rock.

But Arkansas will need another good effort to claim its fifth consecutive victory in this afternoon’s 1 p.m. tipoff, Neighbors said. The game will be streamed online by SEC Network-Plus and can be accessed via WatchESPN.com and the ESPN app (carrier login required).

The Bluejays (7-3) had a five-game winning streak snapped with a 73-71 loss to South Dakota last week, but bounced back with a 71-56 win at Providence on Sunday. Today’s game will be their third in five days.

“A lot of returners, a lot of kids who have played together. Ten kids that really know how to play the game. I’m glad that we’re playing well, kind of settled into our new rotation with injuries. … Excited, but very respectful of the job that Creighton has done.”

Arkansas has won four in a row, but has dealt with some injuries recently. Post players Erynn Barnum, the team’s leading rebounder, and 6-3 freshman Emrie Ellis have missed the last three games, while Amber Ramirez missed Saturday.

Junior Destinee Oberg, who has played very little in her career until now, registered her first double-double against Arkansas-Little Rock and added 10 points, 5 rebounds and 3 assists against UCA. Sophomore guard Rylee Langerman also grabbed team-high eight rebounds in her second start of the season.

Neighbors said Ramirez, the lone senior on the roster, should be back for the SEC opener at Ole Miss on Dec. 30. Ellis might be, too, but it’s likely going to be longer on Barnum, he said. Junior guard Makayla Daniels leads five Razorbacks averaging in double figures in scoring at 13.4 per game.

The Bluejays, who were picked to finish sixth in the Big East in the preseason coaches poll, have some depth and go as many as 10 deep, Neighbors said. They are also similar to Arkansas with their balance offensively. Emma Ronsiek, a 6-1 sophomore, leads Creighton in scoring, averaging 14.8 points per game.

Sophomore Morgan Maly is the only other Bluejay averaging in double figures (10.8), but she has started one game. Sophomore Lauren Jensen and Carly Bachelor, a 6-0 junior, each average a shade under 10 per game.

“The Jensen kid had 17 in the first quarter [Sunday], completely changed some of the things you might write about her on your scout,” Neighbors said. “They can all hit you that way, though. Very, very clear identity. Very, very clear roles, which tells you they’re well-coached.

“They do what they do. You can’t speed them up. You can’t slow them down. They dictate that. They’ve got five players that can stop and post you up at any given time or step out and hit a three.”

Arkansas has relied on three-point shooting and getting to the free throw line for success in the past. That recipe is continuing even though the Razorbacks aren’t shooting as high of a percentage beyond the arc this season.

Arkansas is a bit over 34% from three-point range, which ranks just outside the top 50 in the country. However, its 107 made three-pointers are tied for 11th in Division I, while averaging 8.9 made threes per game is tied for 26th.