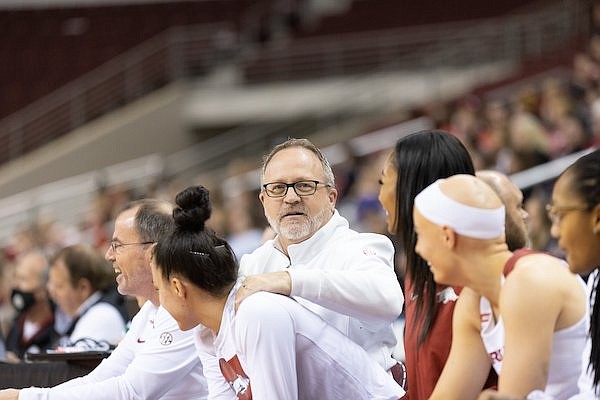 Arkansas coach Mike Neighbors sits on the bench with his team during a game against Central Arkansas on Saturday, Dec. 18, 2021, at Simmons Bank Arena in North Little Rock.

FAYETTEVILLE — The University of Arkansas women’s basketball Southeastern Conference opener at Ole Miss scheduled for Thursday has been postponed due to a combination of a positive covid-19 test, contact tracing and subsequent quarantining of individuals within the Ole Miss program.

But Arkansas coach Mike Neighbors said that doesn’t mean the Razorbacks won’t have a game on Thursday. He was able to arrange a game against 11-time national champion Connecticut last year on the fly and he’s working at it again.

“You know our propensity for wanting to play as many games as we can,” Neighbors said. “I can’t guarantee a blockbuster home game like UConn was, but we’re trying to do something. I got kids that want to play and I think that’s part of my job to help them find games.”

The postponement is consistent with SEC covid-19 management requirements. A team must have at least seven scholarship players and one coach available to play a game. A make-up date has not been determined.

Neighbors said he and the team practiced Monday morning to prepare for a game Thursday, but was contacted Monday afternoon about the issue.

“We got our kids back on campus and got them tested and did everything we needed to do to be able to practice at 10,” Neighbors said.

He said Arkansas and Ole Miss did not have common bye dates, which could make rescheduling difficult.

Guard Amber Ramirez and 6-3 freshman Emrie Ellis were also both back at practice on Monday, Neighbors said. Ramirez missed the last two games with an undisclosed injury, while Ellis rolled her ankle against California and has missed the last five games.

The Razorbacks (10-3) are now scheduled to open SEC play against No. 7 Tennessee at noon Sunday in Bud Walton Arena.