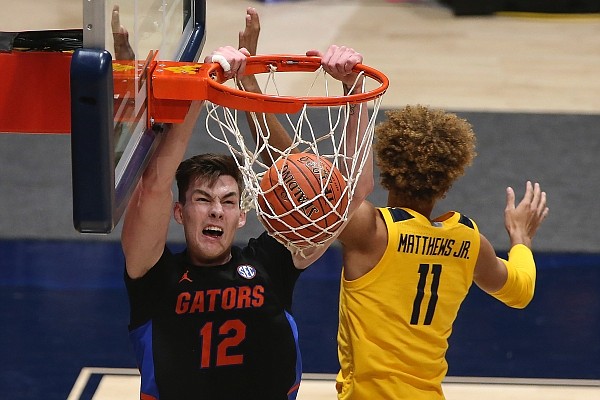 It’s time for the stretch run in league play for the SEC, which won the Big 12/SEC Challenge 5-4 on Saturday for its second outright victory in the eight seasons of the event.

The 10-game balance was thrown off when the Texas at Kentucky game was canceled due to covid-19 issues in the Kentucky program.

The momentum shifted back and forth throughout Saturday, with a 1-1 split in the early games, then the Big 12 moving into a 4-3 advantage after Baylor dispatched Auburn 84-72 as the last of the afternoon games.

The SEC dominated at night with both games at SEC arenas, as Mississippi State crushed Iowa State 95-56 in Starkville, Miss., and No. 18 Tennessee throttled No. 15 Kansas 80-61 in Knoxville, Tenn.

There were three road wins in the challenge, and that’s where the SEC had the edge. Florida edged out No. 11 West Virginia 85-80 on the road, and Texas A&M notched a 68-61 win at Kansas State to offset Texas Tech’s late-game dramatics in the No. 10 Red Raiders’ 76-71 win at LSU.

The overall record is still decidedly in the Big 12’s favor at 44-35. The Big 12 has won four challenges outright, including a pair of 7-3 romps, while the SEC has won two outright. There have been two ties.

However, the SEC is gaining ground with a 2-1-1 edge in the past four challenges. The Big 12 took the first three years of the event by a combined 20-10 count.

Baylor improved to 7-1 in the challenge, with Oklahoma and Oklahoma State right behind at 6-2. The best SEC record in the challenge is Tennessee at 5-2, followed by Florida (5-3). Alabama (3-2) and Kentucky (4-3) are the only other SEC schools with winning records in the event.

CBSSports.com’s Jerry Palm kept Arkansas in his latest NCAA Tournament bracket projection, but it is by the narrowest of margins.

Palm had the Razorbacks as a 12 seed matched up against Stanford in a “first four” game. Palm also has these SEC teams in his bracket: 2 seed Missouri, 3 seeds Alabama and Tennessee, 5 seed Florida and 11 seed LSU.

In Joe Lunardi’s last projection for ESPN.com on Friday, he had the same six SEC teams in this order: 2 seed Alabama, 3 seed Missouri, 5 seed Tennessee, 7 seed Florida, 10 seed LSU and 11 seed Arkansas. The Razorbacks were one of the last four byes into the field.

Florida’s 85-80 upset at No. 11 West Virginia had to be the most impressive performance in the Big 12/SEC Challenge, but Tennessee’s 80-61 crushing of No. 15 Kansas was right there with the Gators.

Missouri had a chance to polish off TCU in the waning seconds of overtime but struggled to close the deal.

Holding a 101-98 lead, the Tigers missed four consecutive free throws in the last 16 seconds as the Horned Frogs fouled on purpose. However, on the last of those misses by Dru Smith, a TCU player stepped in the lane early. Smith capitalized on the violation by hitting his second-chance shot and setting the final score of the 102-98 win with 12 seconds remaining.

Florida forward Colin Castleton made one of the biggest moves of the day with his traditional three-point play with 3:22 remaining in the Gators’ 85-80 win at No. 11 West Virginia.

Castleton initially had the ball batted away on the left elbow, but it caromed from a Mountaineer defender right back to Castleton, who saw clear sailing to the basket. He drove, was fouled by Miles McBride and converted the three-point play for an 81-75 Florida lead.

LSU blew a seven-point lead in the final minute of its 76-71 home loss to Texas Tech on Saturday.

The Tigers took a 71-64 edge on Shareef O’Neal’s layup with 1:06 remaining, but things went haywire the rest of the way as LSU struggled to get the ball out of its backcourt against the Texas Tech press.

Mac McClung, who had been 1 for 5 on three-point shots, nailed one with 59 seconds remaining to slice the lead to 71-67, and Coach Chris Beard called an immediate timeout.

The Tigers successfully inbounded against pressure, but eventually put the ball in the hands of Josh LeBlanc, who was 3 of 7 on free throws this year. LeBlanc missed the front end of a one-and-one opportunity at the line with 48 seconds left.

Chibuzo Agbo missed a three-point try 13 seconds later, but McClung chased down the rebound, scurried to the right corner and buried another three-pointer to make it 71-70.

Trendon Watford had trouble finding someone to throw the inbounds pass to, and McClung tipped the entry pass away to teammate Terrance Shannon Jr., who converted a layup for a 72-71 Texas Tech lead with 23 seconds remaining.

There’s a good selection of SEC games this week among teams at the top of the league standings or projected to have been there in the preseason.

Missouri’s week is particularly intriguing after the Tigers rallied late in regulation to knock off TCU 102-98 at home in overtime.

The Tigers are scheduled to host Kentucky tonight, then league-leading Alabama on Saturday. Missouri was awaiting word Monday as to whether the Wildcats, who had been on a 48-hour covid-19 shutdown that cost them Saturday’s game against Texas in the Big 12/SEC Challenge, would be able to travel to Columbia, Mo.

Alabama also has an intriguing week. The Crimson Tide, coming off one of their worst performances in a 66-61 loss at Oklahoma, hosts LSU on Wednesday at 6 p.m. before facing Missouri this weekend.

LSU is looking for revenge after losing 105-75 at home to the Tide just two weeks ago. In that game, Alabama made an SEC-record 23 three-point shots and jumped out to a 30-8 lead before leading by as many as 43 points.

Florida’s Colin Castleton and Tennessee’s Jaden Springer were announced as the SEC players of the week by the league office Monday.

Springer, a 6-4 guard from Charlotte, N.C., was named SEC freshman of the week after averaging 11 points, 4 assists and 4 rebounds in wins over Mississippi State and No. 15 Kansas. Springer had 13 points, including 7 of 7 free-throw shooting, 4 rebounds and 3 assists against the Jayhawks in his first start since returning from injury.

Vanderbilt put it all together for one night to down South Carolina 93-81 on Saturday to end its conference losing streak at six games.

The Commodores also downed the Gamecocks 83-74 in last year’s regular-season finale before falling 86-73 to Arkansas on the only night of the SEC Tournament in Nashville, Tenn.

Could the Tigers be the team that ends Alabama’s unblemished SEC run? The Crimson Tide have to get past LSU at Coleman Coliseum on Wednesday to give Missouri this shot. LSU will be looking to avenge a 105-75 home beat down at the hands of the Tide.

“We’re either going to get tough enough and do it or we’re going to struggle and lose games because of it. We’ve just allowed people to play harder and be more aggressive and not go at it the way we need to.” — Tennessee Coach Rick Barnes on his team’s plus-15 rebound edge over Kansas

“We can go one of two ways. We can come back and play a lot better the next game or we could tailspin. We’ll see what our leadership does.” — Alabama Coach Nate Oats after Oklahoma snapped the Tide’s 10-game winning streak

“It’s a high, high-level program. Huggs [Bob Huggins] has won about 7 million games and they guard the heck out of you. It looked ugly at times, and to look down and see you scored 83 [actually 85] is a little bit hard to believe.” Florida Coach Mike White after an 85-80 win at No. 11 West Virginia