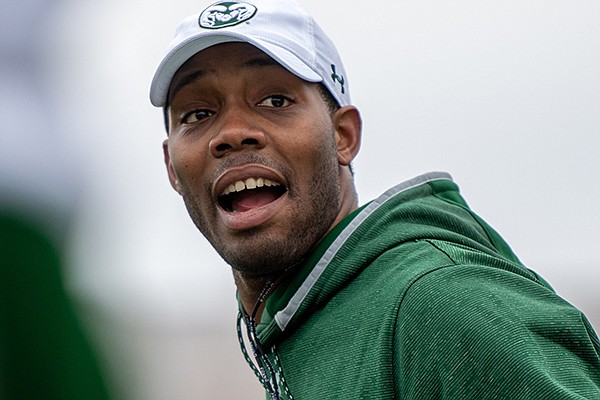 FAYETTEVILLE — Kenny Guiton was born into a coaching family.

Guiton’s father, Kenneth, spent years teaching the game at the high school level in Houston, and his uncle did, too. Guiton grew up around football, attending games at Eisenhower High School and even serving as a ball boy for the team prior to the start of his own prep career.

He knew the career path he wanted to take, but he never imagined becoming a college coach, especially at the Power 5 level and at the age of 29. Guiton credits former Ohio State coaches Jim Tressel and Urban Meyer, and former Houston head coach Tom Herman for pushing him toward the profession.

He began his coaching career in 2015 as a graduate assistant under Herman. Five-plus years later, accepting the Arkansas job was a no-brainer.

“I had a chance to play under some great guys, and when they told me I had a chance to be on this level, I wanted to dive headfirst into it,” Guiton said Thursday. “So that's what I did, and it's been awesome. I'm happy I did that."

Arkansas coach Sam Pittman said Thursday that Briles “jumped up on the table” for Guiton.

“That kind of got him in the door. I love the guy,” Pittman said. “He’s really mature. He’s a recruiter. He’s already won our players over. Just a very charismatic, exciting guy to be around. I felt that way on the telephone with him when I was interviewing him.

“I just think he fit. I think he’s an Arkansas fit and I know he’s a great recruiter, and we need some more recruiters in the state of Texas.”

He now inherits a receivers room that returns all but one player who caught a pass in 2020. It is headlined by Treylon Burks, Mike Woods and De’Vion Warren, who combined for more than 1,700 yards and 15 touchdowns last season.

A second team All-SEC selection as a sophomore, Burks is more impressive in person than on tape, in Guiton's opinion.

“He's just a guy, you get the ball in his hands and say, 'Hey, go, big boy. Go make a play.' That's what he's done in the past. Don't expect that to change any time soon. I think he's got some things he can work on and get even better. To be a great player and also have room for improvement is all you can ask for. He's accepted coaching, and I know he'll get even better."

As a whole, Guiton believes his room can be dangerous. Woods returns after a career-best year in which he finished with 617 yards and five scores, and was Arkansas’ biggest vertical threat.

Among Razorbacks receivers with 10-plus catches, Woods led the team in yards per catch and was second in yards after catch with 226, according to SECStatCat, a website dedicated to SEC football analytics.

“This room, I think it's deep. I can't wait to get my hands on it and develop it more,” Guiton said. “It's kind of weird, you get an extra year with some guys, like Mike Woods and Tyson Morris, to where it's like you keep the depth in that room and also get to add to it with those freshmen coming in like Ketron (Jackson) , Rocket (Sanders) and Jaedon (Wilson), and Bryce (Stephens) coming this summer.

“I’m looking forward to it. I can't wait to get my hands on these guys and really get a chance to develop the room, because it's a deep one."

Guiton, who played with Wilson’s older brother in his final season at Ohio State, has noticed Briles’ offense is much cleaner with more clear verbiage since their time together at Houston. That makes things easier on his receivers to play even faster, he said.

In recruiting, Guiton will hit a number of areas in Texas, and he also has experience hunting talent in Louisiana thanks to his year at Louisiana Tech. He is eager to seek out high-quality players and simply be himself in the process.

“It’s a lot of fun for me. I love to go out and hit the road,” said Guiton, who wants consistent and tough players in his room. “We haven’t been able to do that lately, but I love to hit the road and get the opportunity to meet coaches and give these kids the opportunity of a lifetime. When they get that offer, it’s something big.

“If I show the love I have for Arkansas, I know that will bleed off on those guys and they’ll jump in and be ready to roll.”