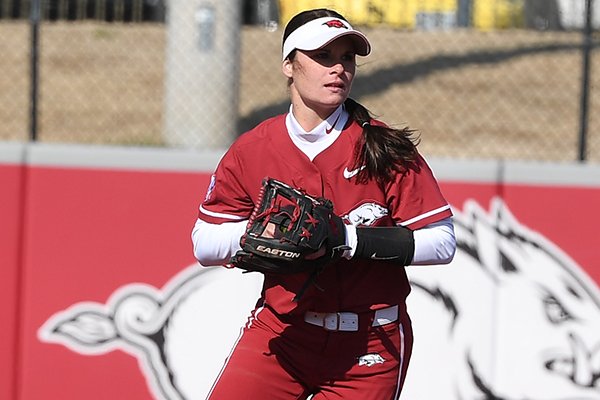 FAYETTEVILLE — Arkansas softball Coach Courtney Deifel said her team may get overlooked at times in the loaded Southeastern Conference, but not on Thursday when the preseason All-SEC selections were announced.

Redshirt redshirt seniors Braxton Burnside and Autumn Storms, along with redshirt junior Hannah McEwen earned the honor. It was the second consecutive season Storms and McEwen were selected to the team, which is chosen by league’s head coaches. Arkansas is just one of three teams with three or more selections.

Having three chosen is an honor in league as deep with talent as the SEC, said Deifel, who begins her sixth season at Arkansas.

“I think it’s a huge compliment to this team and work they’ve put in to get here,” Deifel said. “Them being recognized for how far they’ve come. But then still I think they have more in them and it’s pretty special.”

Burnside hit .392 with a team-high 31 hits and started all 25 games at shortstop in the covid-19-shortened 2020 season, after transferring from Missouri. The Paragould native ranked 17th in the SEC with 49 total bases and had a team-high 11 multi-hit games and led the team with a .620 slugging percentage.

Deifel was pleased to see Burnside earn the recognition.

“I think it’s a huge statement,” Deifel said. “It didn’t surprise me because I think she’s incredible. But I get to see it every day.

“You can appreciate her numbers from afar but you really get to appreciate Braxton when you get to watch her in person and what she does and the glue she is for our team.”

McEwen ranked among the top 10 in the nation with a .565 on-base percentage last season and eighth in the SEC with a .418 batting average. Her career .371 average is the top mark in program history. The outfielder is also the only player in the SEC to lead her team in batting average each of the last three seasons.

Storms racked up a league-leading 11 victories. Her 59 career wins are third-most in school history and ranks fifth in ERA (2.07) and opponent batting average (.245).

Deifel said McEwen has shown remarkable consistency at the plate, but she’s flashing more power now than last season. Storms has dealt with a back problem some in the fall, but she looked ready for action in a recent practice session, Deifel said.

“I think she’s [McEwen] is swinging it better than she ever has which is kind of crazy to say if you look at her numbers,” Deifel said. “… she has the ability to put the ball out at will. She is swinging it with such power right now which we haven’t seen her do. She’s so good, it’s like she just decided to swing for power.

“Autumn is one of the fiercest competitors that I’ve ever had the privilege of watching. She threw live for the first time the other day and I think our whole team was like ‘holy crap, here we go we’re ready.’”

Arkansas, which is ranked No. 18 in the USA Today Coaches poll, opens its season Feb. 12 in the Best on the Bayou Classic in Monroe, La., The home opener is slated for Feb. 25 with a doubleheader against North Dakota State at Bogle Park. First pitch is scheduled for a 3 p.m.