McLeod happy to be back in Arkansas 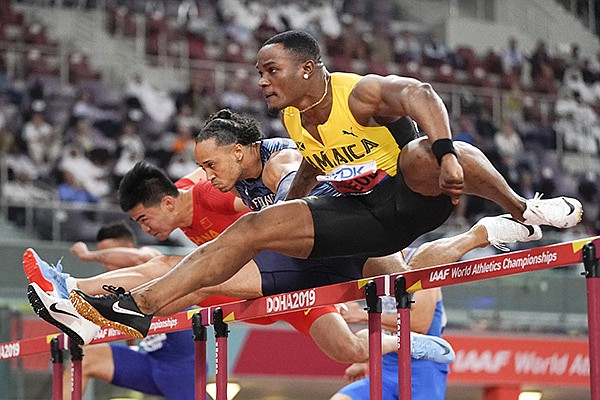 FAYETTEVILLE — When Omar McLeod walked out of the Northwest Arkansas Regional Airport terminal two weeks ago, his sense of smell told him he was in familiar territory.

“Especially after being in a busy city or overseas, there’s just nothing like that fresh, organic, natural scent that Arkansas gives,” McLeod said. “When I was able to smell that again, it was very emotional.”

McLeod knew he was back where he was a three-time NCAA champion for the University of Arkansas in two years before turning pro and winning the gold medal in the 110-meter hurdles at the 2016 Olympics for his native Jamaica.

“My training partners also came with me and they said, ‘This is where you went to college?’ ” said McLeod, who now lives in Jacksonville, Fla. “I told them, ‘Trust me, this is where I spent some of the best years of my life.’

“They’re all city people and people from England and all over the world. They came to little Arkansas, and I told them I wouldn’t trade my time here for the world. Because this place taught me so much about myself.

“I did a lot of growing up here before going into my pro life. Arkansas was a cornerstone that helped make me who I am.”

Two weeks ago at the first American Track League meet held at the Randal Tyson Track Center, McLeod competed in the 60 meters — his first racing competition since June — and finished fourth in a field of 16 in 6.73 seconds.

“It was a rust-buster, a race to get my season going,” McLeod said. “It was a chance to get in some speed work, because of all of my training had been strength. I was happy I was able to hold my own with a great group of sprinters.”

McLeod, 26, will be back at the venue today to compete in his indoor specialty, the 60 hurdles, in the third American Track League meet.

No fans are allowed because of coronavirus safety protocols, but the meet will be televised on ESPN from 3:30-5:30 p.m. leading into the Super Bowl.

“I have to credit the American Track League for giving us an opportunity to come out here and feel some sort of normalcy, and to be in our element again,” McLeod said. “I’m very, very grateful.

“We’re all hoping for the best, and I’m pretty sure the Olympics will go on and athletes will get an opportunity again to showcase themselves.”

McLeod said he’s ready to focus on his race after having an emotional return to Arkansas two weeks ago. He also is fully recovered from a stress fracture in his right foot.

“I can assure you that you will see me out there having fun,” he said of today’s race. “When Omar is happy and Omar is healthy, I’m going to run fast.”