No soft opening for Arkansas softball 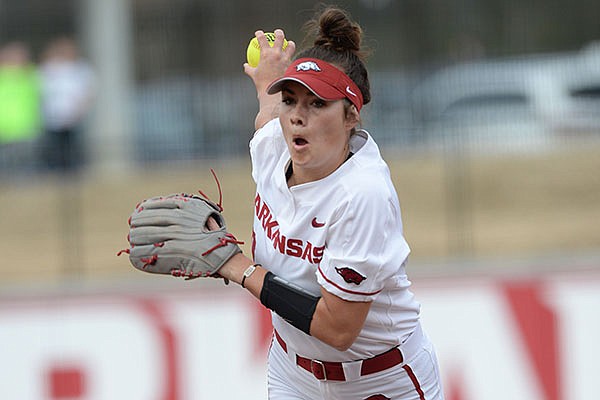 Arkansas pitcher Autumn Storms delivers to the plate against Kentucky Friday, March 29, 2019, during the first inning at Bogle Park in Fayetteville.

FAYETTEVILLE — Autumn Storms said she and the University of Arkansas softball team are ready for anything that comes their way after a season cut short by the coronavirus pandemic a year ago.

“We’re so ready for the season to start,” said Storms, who was one of three Razorbacks named to the preseason all-SEC team. “Obviously, it’s hard to remember even what it’s like to play at this point it’s been so long.

“We are just so excited to be able to get back out on the diamond and be able to just be a team again and feel just so connected with each other."

The No. 21 Razorbacks get to test that theory quicker than expected. They were tossed a curve already as the schedule for this week’s Best on the Bayou Classic in Monroe, La., was adjusted because of inclement weather.

Arkansas originally was supposed to begin play Friday and end the weekend against No. 10 Oklahoma State on Sunday. Now the Razorbacks open the season today at 3 p.m. against the nationally ranked Cowgirls.

“I was excited about this weekend going into it,” said Deifel, who is entering her sixth season at Arkansas. “I think it’s going to be a good test, and when you get to open up with Oklahoma State, then game on. Let’s go. Let’s see what we’re made of.

The Razorbacks return all but one player from last year’s group that finished 19-6 and ranked 19th in the final USA Today coaches poll. Only senior center fielder Sydney Parr chose not to utilize the additional year given to players by the NCAA because of the pandemic. Arkansas also added seven freshmen.

Deifel likes the team’s depth, especially in the circle where Storms is the leader.

“This is the strongest team we’ve had since we got here,” Deifel said. “It’s the most complete team. I think our pitching has been a strength for us, and it continues to be.

“We haven’t had a ton of depth in years past. And it’s not just depth, it’s really quality depth. I think it’s a year we’re gonna need that.”

Storms said the team is committed to do whatever it takes to stay on the field and avoid covid-19 issues.

“There’s not really one person that’s even thought about the fact that we’re not going to play because we’re gonna put everything we have possible out on that field,” Storms said. “… we have a softball bubble, and we’re gonna stick to that as much as we can.”

Arkansas is scheduled to play five games over the weekend, facing Lipscomb and Jacksonville State on Friday, then finishing against Lipscomb and host Louisiana-Monroe on Saturday.

The Razorbacks are slated to play five games in the Texas-Arlington Maverick Classic on Feb. 19-21 before their home opener against North Dakota State on Feb. 25.