Razorbacks refreshed and aiming for improvement 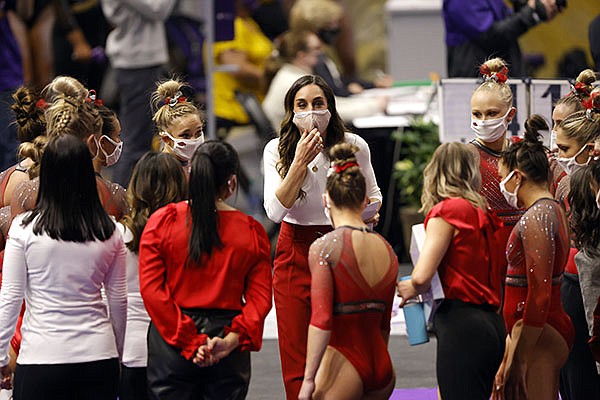 FAYETTEVILLE — The University of Arkansas gymnastics team is rested and healthier heading into the back half of its regular-season schedule tonight at Kentucky.

Second-year Arkansas Coach Jordyn Wieber said the open date came at a very good time for the Razorbacks, allowing injured gymnasts like Amanda Elswick and Kiara Gianfagna to get healthier.

“What I try to do is find a balance between letting our team rest and get healthy, but still pushing to get better,” Wieber said. “That looked different for every person.”

In the first half of the open week, the Razorbacks tried to perfect small elements within routines. In the second half, they did half-meet intrasquads.

“The motivation of the team stayed consistent the whole time, which I’m really happy with, and it has carried over nicely through this week as well,” Wieber said. “The team is ready to get back out there.”

Arkansas still has the top floor exercise score in the country, a 49.5 in Week 2 against LSU. The Razorbacks are tied for third nationally on the floor (49.35 average score) and are alone in third on the balance beam (49.269).

Those top five rankings do not surprise Wieber.

“It’s what they do every day in practice,” she said. “When they go to meets, that’s their normal. That’s their default. Especially after a mistake, being able to have that teammate’s back and be able to step up and just do a normal routine.

“I think it’s come down to the way they’ve prepared both mentally and physically. So when they go out and compete, nothing is happening by accident. They’re not getting lucky when they hit routines. It’s because they’ve prepared very well.”

Wieber and her staff broke down the details of all four events to the team, harping on landings on the vault, handstands and dismounts on the uneven bars, instilling confidence and landings on the beam and the performance aspect of floor exercise.

“Floor, they’ve been doing a fabulous job,” Wieber said. “But one area I’ve challenged them with was to step up their game in their performance quality a little bit, and being really, really intentional with every movement, including the tumbling, including the leaps, but also including the dance and the choreography. It’s been fun to break those down and work on the little details.”

Hambrick and Shaffer are expected to compete in the all-around against Kentucky standout Raena Worley, who is 10th in the nation (39.394). Worley and fellow Wildcat all-arounders Josie Angeny and Bailey Bunn compete in half of the team’s routines.

Arkansas and Kentucky have not competed against a common opponent yet. While the Razorbacks have faced all top 10 competition, including three meets against Nos. 1 and 2 Florida and LSU, the Wildcats have lost twice to Alabama and swept meets against Auburn and Missouri.

The Razorbacks return to Barnhill Arena next week for back-to-back meets against Missouri and Alabama, then wrap up the regular season with a road trip to Auburn.