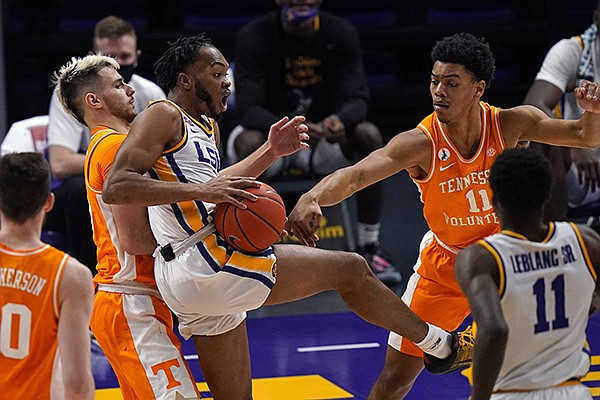 The Volunteers (14-5, 7-5) trailed for most of the game but were within 50-46 nearly midway through the second half. Tennessee made just six field goals over the final 12 minutes, though, and the Tigers stretched their lead to as much as 17.

“We played probably our best game to date,” LSU Coach Will Wade said. “We got contributions from everyone. It was a total team effort. This is something we can continue to build off of.”

After winning two games in impressive fashion against Kentucky and Georgia, the Volunteers struggled against the Tigers.

“The inconsistency is coming from our older players,” Tennessee Coach Rick Barnes said. “We shouldn’t be putting the pressure on the younger guys (freshmen Springer and Johnson). They are talented players, but we still need a balance. Consistency has to come from a group of guys on both ends.”

LSU’s defense caused problems for Tennessee in the first half. The Vols went almost nine minutes without a field goal as LSU grabbed a 28-16 lead. Thomas and Smart combined for 13 points during the Tigers’ 16-4 run.

However, Tennessee reduced its deficit over the last four minutes before halftime when LSU scored only three points on a three-pointer by Days. Two three-pointers by Johnson helped the Volunteers pull within 31-26 by the end of the half.

“We set the tone with our defense,” Wade said. “We were really, really active on defense in the first half. We got our hands on a lot of balls.”

TUSCALOOSA, Ala. — Herbert Jones scored 17 of his career-high 21 points in the first half and No. 11 Alabama had a blistering shooting night in a 115-82 rout over Georgia.

Freshman Josh Primo scored 19 points, all after the half, for the Crimson Tide (17-5, 12-1), which reached a season high in points. It was the most points Alabama has scored in an SEC game.

Alabama came into the day with a 31/2-game lead in the league standings with four now remaining in the regular season. The Tide hit 18 of 30 three-pointers to fuel the easy win, topping its previous high of 105 points against LSU.

The Bulldogs (12-8, 5-8) have dropped the first two of a three-game string of games against the SEC’s ranked teams. But freshman K.D. Johnson, at least, had a big week. He scored a career-high 22 points against No. 16 Tennessee and topped that with 24 on Saturday.

Kentucky trailed the entire first half, built a 14-point lead early in the second and saw Auburn rally to tie before Davion Mintz snapped the deadlock with 33 seconds left. The Wildcats then went 2 of 4 from the line while the Tigers missed their final four shots, including a block and two shots under their basket.

JT Thor was fouled on a three-point try with 1.1 seconds remaining and made all three free throws but Kentucky completed a long inbounds pass to end the game.

Besides what would have been John Calipari’s first five-game slide in his 12 years at Kentucky (6-13, 5-8), the Wildcats prevented their first-ever three-game losing streak at 45-year-old Rupp Arena. They also denied the Tigers (11-11, 5-8) their first season sweep. The Tigers are 2-50 inside Rupp with their last win there coming in 1988. Keion Brooks Jr. added 12 points for Kentucky, which shot 53% in the second half and made 8 of 13 from the arc after going 3 of 11 from long distance in the first half.

Thor was 5 of 6 on three-pointers in scoring 24 points with nine rebounds for Auburn. Allen Flanigan (Little Rock Parkview) added 23 points and Sharife Cooper, averaging 20.2 points per game coming in, finished with 14 points and eight assists but on just 6-of-23 shooting.

The game was tied at 28 with just over five minutes to go in the first half when Vanderbilt put together a 17-0 run with Evans, Pippen and Brown combining for 14 points. Dylan Disu contributed one of the 3 three-pointers the Commodores hit while going 5 of 7 from the floor and 4 of 4 from the foul line.

COLUMBIA, S.C. — Devontae Shuler scored a career-high 31 points in a return to his native South Carolina and his shot block and resulting pair of free throws with nine seconds left helped Ole Miss hold off the Gamecocks, 81-74.

TJ Moss hit a three-pointer with 17 seconds left and South Carolina trailed by five and got the ball back on a Lawson steal. He missed a three-pointer and Hannibal’s putback attempt was blocked by Shuler, who was fouled and made both to ice the win.