McKinney, who helped Hogs to 3 SWC titles, dies at 82 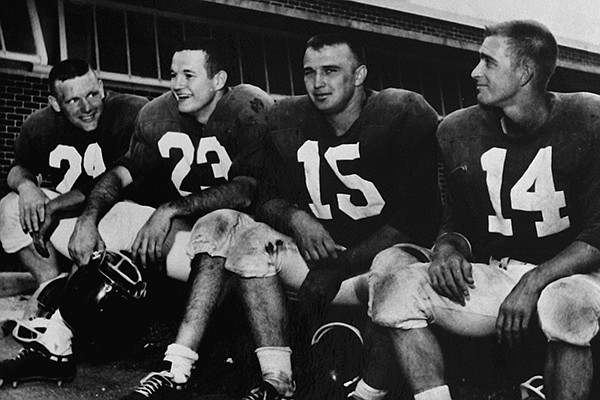 FAYETTEVILLE — George McKinney, who played quarterback and safety for the University of Arkansas on three consecutive Southwest Conference championship teams from 1959-61, died Monday night in Knoxville, Tenn. He was 82.

McKinney, who came to Arkansas from Texarkana, Texas, was one of three captains on the 1961 team along with John Childress and Harold Horton.

“Back in those days your teammates elected you captain,” Horton said Tuesday. “So that tells you what his teammates thought of George.

“With his passing, we all feel that loss. Every one of his teammates feels it, because George was a good friend to all of us.”

McKinney, inducted into the UA Sports Hall of Honor in 2008, redshirted in 1958 when Arkansas was 4-6 in Frank Broyles’ first season as coach.

McKinney then helped the Razorbacks to a combined 25-8-1 record the next three seasons, including 17-3 in the SWC. They shared the 1959 SWC title with Texas, won it outright in 1960 and shared it with Texas in 1961. They finished those seasons ranked No. 9, No. 7 and No. 9 nationally, and played in the Gator, Cotton and Sugar bowls.

After being a backup as a sophomore, McKinney was Arkansas’ starting quarterback and safety in 1960 and 1961.

As a junior, McKinney passed for 728 yards and led the SWC with nine touchdowns. Twice that season he was recognized as the national player of the week by Sports Illustrated and United Press International after Arkansas beat Texas 24-23 and Texas Tech 34-6.

McKinney also led the Razorbacks with two interceptions in 1960. As a senior, he again led Arkansas with 426 passing yards and six touchdowns.

Ken Hatfield, an Arkansas freshman in 1961, recalled the iron man performance by McKinney in the season opener against Ole Miss when the No. 9 Rebels beat the No. 12 Razorbacks 16-0.

“When George was playing, you played both ways on offense and defense,” said Hatfield, who became a star defensive back and punt returner for the Razorbacks and coached Arkansas to a 55-17-1 record from 1984-89. “In a lot of games you’d substitute on defense so the quarterback could rest up for offense.

“Billy Moore was our backup quarterback, and he’d alternate with George on defense. But when we played Ole Miss down in Jackson, Mississippi, in ’61, Billy got hurt. It was hotter than blazes, but I think George played that whole game on offense and defense. I don’t think he came out for one play.

“Man, I felt for him, because it was so hot. But he made it through.”

When Doug Dickey, an Arkansas assistant from 1958-63, became Tennessee’s coach in 1964, he hired McKinney to be a freshman coach for the Vols.

“During the time George was there, Tennessee was as good as any program in the country,” Hatfield said.

Hatfield joined Dickey and McKinney at Tennessee as the freshman coach in 1965.

“George was a very precise coach,” Hatfield said. “He was totally dedicated to coaching and recruiting. He was very aggressive in his coaching, and he wanted the players to play that way, too.”

When Dickey left Tennessee to go to Florida as coach in 1970, McKinney went along as an assistant.

The next season when Charlie Coffey — Arkansas’ defensive coordinator from 1966-70 — became Virginia Tech’s coach, McKinney joined him as an assistant coach.

After getting out of coaching, McKinney worked in business, including a long stay in Little Rock with Lindsey Management.

McKinney moved to Lenoir City, Tenn. — part of the Knoxville metropolitan area — 3 1/2 years ago. He battled illness in recent years and died at the University of Tennessee Medical Center.

Horton and McKinney met at Arkansas as true freshmen in the fall of 1957.

“Back then you could give 50 scholarships a year, so there was a lot of competition,” Horton said. “By our senior year, there were only about 15 or 16 of us left.

“It wasn’t easy back then. There were some survival periods we had to work through, but George was always ready to work.”

“When I was a freshman, George kind of took me under his wing, but he really was a friend to everybody,” Hatfield said. “There literally wasn’t anybody that didn’t love George McKinney as a person.”